in Cali with the most WONDERFUL Husband in the GAL

"Moe Money" awards 5, 10, 15, 20 or 25 free games, with a prize multiplier of x2, x5 or x10. And any retrigger adds 10 extra games to this feature!
"Curly Cash" awards 10, 20 or 30 free games where all prizes are TRIPLED. Trigger "Larry's Loot" to reveal prizes up to x1000 bet.
Win the progressive jackpot by revealing 5 "Three Stooges" symbols on any payline. During normal play, "Three Stooges" will substitute for all symbols except scattered Larry, Curly & Moe. 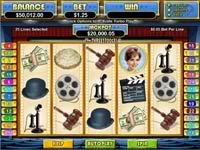 During normal play "Coyote" substitutes for all symbols except scattered "Loots". Prizes double when 1 or more appear in a winning combination. The Coyote Cash Free Game Feature
is triggered when 3 or more scattered Loots appear anywhere awarding 20 free games Prizes are multiplied by 2, 3 or 4 during the free games for 3, 4 or 5 triggering Loots, respectively.
Additional free games can be won during the feature and are played at the initial multiplier. At anytime you may win the randomly-awarded progressive jackpot! 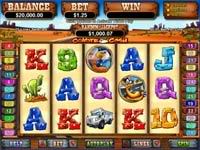 During normal play "Rudolph" substitutes for all other symbols except scattered "Bombs". Rudolph’s Revenge Free Game Feature is triggered when 3 or more scattered "Bombs" appear left to right
awarding 7 free games. Prizes during each free game will be multiplied by 2 plus the number of substitute Rudolph’s appearing on screen.
Scattered "Bombs" acts as additional "Rudolph" Substitute if 4 Scatters trigger the feature. Santa and scattered Bomb act as additional Rudolph Substitutes if 5 Scatters trigger the feature. 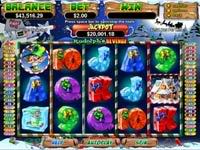