Boom Pirates Is Here to Take You on an Explosive Adventure!

Microgaming has announced the release of its newest slot Boom Pirates, developed exclusively by Foxium. This video slot comes with brand new Wonderways™ mechanics and a Foxify™ feature!

Boom Pirates takes you on a pirate adventure, where Captain Mary and her band of pirates will guide you through the shipload of features on the huge pirate ship. 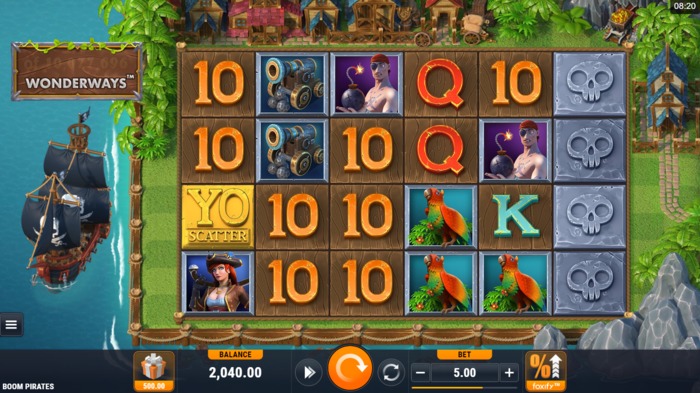 When you board the ship, you will sail the calm waters and arrive at an island, with six houses and a cave with a skull-style entrance. But as the gameplay progresses, you will see another scenery appearing, equally visually appealing, thanks to the graphics mastered to perfection.

On the reels, you will see the dangerous-looking Captain Mary as the highest-paying symbol, giving you 2,500x the stake for the best combo. Her sidekick, the One-Eyed Pirate, gives you 2,000x the stake, followed by the parrot with 1,500x, the cannon with 1,000x and the barrel with 750x the stake. The playing card royals from 10 through A, set against wooden backgrounds, give you 500x the stake for their best respective combos.

You must have noticed that we mentioned no Wilds, and that’s because the slot doesn’t really offer any.
But you will see two Scatters, the Yo Scatter and the Ho Scatter. These will take you to the bonus, where you will see that the ship has arrived on the island, at night. You will see the waves, the Jolly Roger, and the palms on both sides of the reels. Needless to say, the colours, graphics and attention to detail are impeccable in the entire slot, but most emphasized here.

And, you will see that there are 5 reels with 4 rows, and one locked reel with skull symbols on it, initially giving you 1,024 ways to win. During the gameplay, though, the reel grid can expand.

Similarly to the Megaways™ by BTG, the new Wonderways™ mechanics introduced in Boom Pirate will deliver up to 10,077,696 ways to win. When you see cannons attacking the reels, you should know that the reels and rows are expanding, so wait for that boom, boom, pow!

In terms of gameplay, the first decision you will have to make is whether you’d like the Foxify™ feature active. With it, your bet increases by 50%, but your chances of triggering the Free Spins improve.

Another option you have here is the Buy Feature where you can skip the base game and go to the Free Spins directly, for a 100x the stake bet.

Now, you should know that the game offers two random features.

During the base game, the Boom Pirates feature will activate the previously mentioned Wonderways™ which expands the reels and rows to give you 10,077,696 ways to win. This feature triggers at random, and the extra reels and rows are active only if they contain winning symbols.

The second Mary’s Swashbuckling Attack feature may trigger after a non-winning spin when the Captain will swing in a rope and transform some symbols to give you a 5-of-a-kind win.

And finally, you have the Free Spins.

We said that these can be bought with the Buy Feature and the chances of triggering it will improve with the Foxify™ bet, but you can trigger them the usual way, too. Land 3 Scattered symbols anywhere on the 1st, 3rd or 5th reel, and you’ll get 10 Free Spins. Once active, if you manage to land 3 more Scatters, you get 5 additional Free Spins.

During the feature, on the whole 6x9 reel grid, you might see additional cells unlocking at random. When activated, they will remain active until the end of the Free Spins. Overall, the game can deliver a staggering 38,000x the stake payout!

Microgaming’s Statement on the Release

Microgaming's Director of Global Operations James Buchanan said that Boom Pirates was packed with thrilling features, new features, new mechanics and theme-related soundtrack. He said that Mary, the Captain, would take players on a really exciting adventure as they navigate the seas and use cannon fire to unlock more ways to win. The pirates, in their quests for treasure, would help players expand the reels to an astonishing 6x9 grid with over 10,000,000 ways to win, giving them the potential to win significant rewards, up to 38,000x the stake.

The developer also published Foxium’s statement. The CEO at Foxium, Åke André said that Boom Pirates was set to be an explosive success, and marked the maiden voyage of the new Wonderways™ and Foxify™ technologies, which they believed would transform players’ experience and enable their creative teams to take game development to the next level.