The movie tells the tale of a woman who suffers a number of misfortunes after she is asked to serve as maid of honor in her best friend’s wedding party. 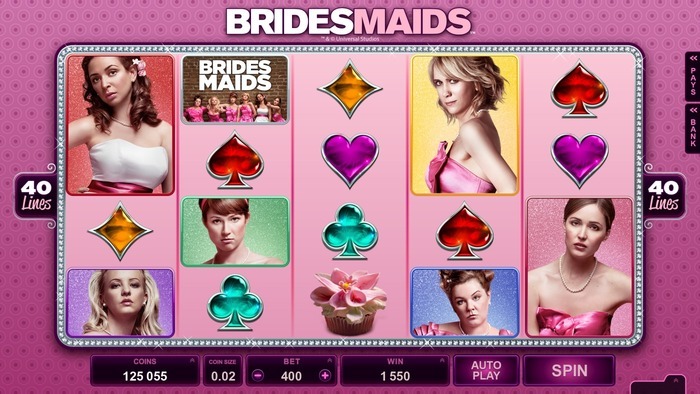 Microgaming’s take on the movie – a five reel, 40 pay line video slot game - is expected to be another hugely successful release by the group,
industry-famous for creating excellent branded video slot games such as Game of Thrones and more.

What makes successful movie slot games is their ability to bring the feel of the original movie to the reels of the game, and it seems that Microgaming has managed to do this with Bridesmaids slot.The game features original clips from the movie, while the six leading female characters feature prominently as symbols on the reels. Other symbols on the reels include gemmed card symbols. Five of a kind wins result in movie clip scenes together with payouts.

The Wheel Bonus feature is the player’s key to big rewards, and it can be activated by landing three or more Cupcake scatter symbols.
A spin on this bonus wheel allows players access to 10 cash prizes, a jackpot prize or the chance to play one of the four bonus features.

These bonus features are offered across two free spins and include Rolling Reels, Growling Wilds, stacked symbols and both-way wins.
Players stand to win up to 1,750 times their stake through these features, as well as other cash prizes.

The Cupcake Booster feature is also a reward-booster, putting players in line to win up to 300 times their original stake.

As with the vast majority of Microgaming slot games, there are many ways to win when playing Bridesmaids slots, not least of which can be done through the many different bonus features. The game boasts a high return to player rate of up to 97% which should be an important element in its own right.

The minimum wager on Bridesmaids slots is 0.40, while the maximum is 60.00.
Players can stand to win the maximum non-progressive jackpot of 105,000 coins if they play the maximum bet.

All in all, Bridesmaids slots promises to be a welcome addition to online casinos where it is due to launch.
The fun, frivolous theme, packed with plenty of ways to win and a well-recognized brand is a definite recipe for success.
Reactions: Mike