Everyone enjoys a good magic trick every now and again, and it can be even more fun to be the person who is the center of the attention - flourishing cards and making things appear,
well, magical. If you enjoy entertaining your friends and want to cause a little stir at your next get together at the casino, try learning these easy magic tricks. They are tricks that are
designed to be specifically related to poker games and other kinds of games on the gambling floor. You may be surprised at how simple they are to learn and what a big impact they
make on your viewers. Ready to get magical? 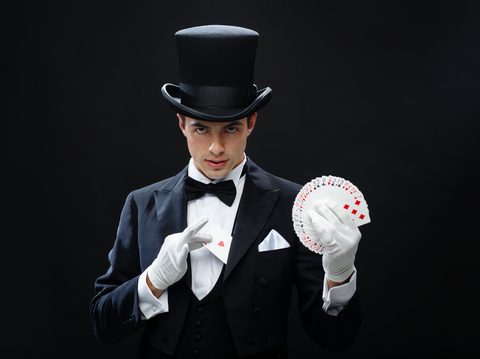 Have you ever wished you could deal a royal flush with a flick of your wrist whenever you felt like it? If you are a frequent poker player, then of course you have! This trick, like many good illusions,
involves far cleverer talking and misdirection than actual skill with a poker deck. The royal flush trick is all about preparation and flourish. Take a look at the steps below to learn how to perform this
clever trick the next time you feel like impressing your buddies.

This magic trick is a variation of the flush trick and is one of the best ways to give yourself four matching aces - it will make you appear as if you are a poker master. All this trick requires is (as seen above)
a great deal of talking and misdirection. Very little skill is actually involved, but you will certainly look like a card master upon finishing the trick. This one is so easy that a child could learn it. Ready?

This trick is equally easy and results in four aces just like the last trick did; however, it is conducted in an entirely different manner. The spectator is the one who separates the deck, making it seem
as if you are innocent of any “crime.” After the spectator mixes up the piles and flips the first card, he or she discovers that there is an ace on top of every single pile. Wow! The trick? The spectator
thinks that he or she is cutting the cards in a totally random style; however, he or she is actually cutting and dealing exactly as you want him or her to. Find out how:

Presto! Three card tricks for your enjoyment. The next time you feel like impressing your friends during a night out at the casino, try one of the tricks listed above.
Reactions: Ellis and Mike