With NetEnt’s Fairytale Legends trilogy in the news right now, we thought it would be a good idea to remind players of the first game in the series,
namely Fairytale Legends: Red Riding Hood. 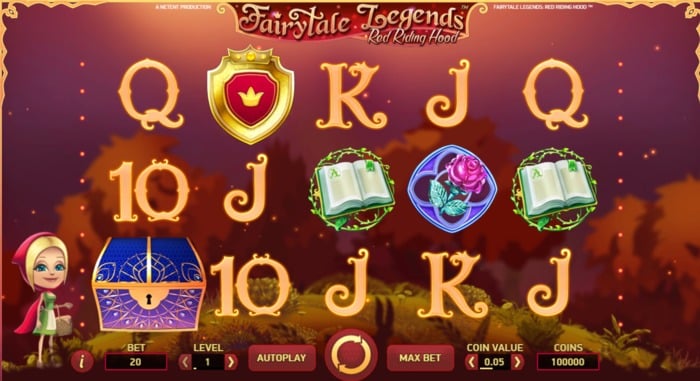 NetEnt knows from past experience (as well as from similar games by other software providers such as Microgaming), that games based on European fairytales are always bestsellers at online casinos. There is probably no fairytale more popular than that of Little Red Riding Hood – about the young red-cape wearing girl who heads into the forest to take food to her sick grandma, and the adventures she has as she meets the hungry wolf along the way.

This five reel, three row, twenty-fixed pay line slot is set against the background of a lush forest, and all the symbols tie in with the original theme.

While lower value symbols such as 10, Jack, Queen, King and Ace can be found on the reels, the ones you will want to look out for are the higher value based symbols such as the Crown Crest, the Key, the Book, the Rose and the Fairytale Legends logo.

She may be young, but Little Red Riding Hood is certainly a force to be reckoned with in this game. She is wild symbol in the slot and she will appear on reels number 2, 3 and 4 in the base game.
If two wild symbols appear in the game, they remain frozen in place for a free respin.

Land three or more scatter Treasure Chests anywhere on reels one, three and five and you will be able to choose from one of three bonus features.

Beware the Wolf Bonus Feature: Play this board game, take a spin and land one of several great prizes, including coins, multipliers and a jackpot coin win of up to 200 times your stake.
If you land on Collect, the bonus feature ends.

Free Spins Bonus Feature: You will first win 10 free spins, but if you land extra Treasure Chests during this feature, you win two extra spins.
If you land wild symbols during the feature, at least two wilds frees in place.

Coin Win Feature: Your total stake will be multiplied by 15.

In addition to the above features, players will also find randomly activated Fairy Features in the base game, including a Fairy Magic Spin, a Fairy Surprise and Fairy Wild Spin.