From Reel to Reel: Movie Slots

We all know that slot machines are flashy but movie-themed slot machines are FLASHY (with a capital everything). They bring you in with their familiarity and keep you playing with some of the best
paylines, bonus features, and free spin functions around. And when you get a winning line you’re treated to great, nostalgic footage that will keep you wanting to play more just to see what other clips
they have in store. Here are just a few movie slots that will keep you wanting more.

When you see the paylines, all 243 of them, you’ll know automatically that this is a Microgaming slot machine. It’s pretty standard for them, really. But, if it ain’t broke… 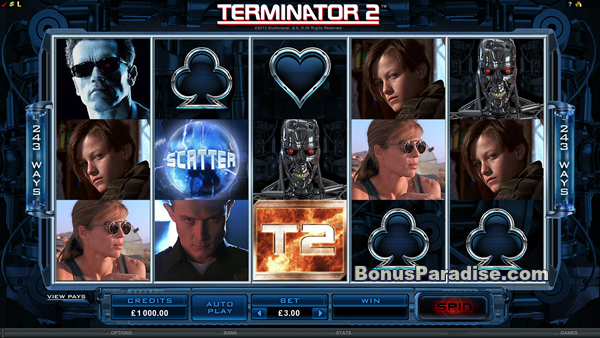 What they really excel at is how they put together the rest of their games. With the Terminator 2: Judgment Day slot, they’ve put together put a fine game together. You’ll love the symbols they’ve used
on the reels. Familiar faces and things from the movie pop up, like John and Sarah Connor, T-1000, T-800, Time Travel Orbs, and good old Arnold himself. The rest of the symbols: hearts, spades, clubs,
and diamonds, are a sleek metallic color that fits the robot, sci-fi theme of the movie. The clips and pictures look a little grainy but, really, it’s because the film that they all come from is from 1991, so we
can cut the game some slack there.

The game is really mid-variance, so you’ll get your hands on some big bucks, just not as often as with some other games. That being said, it has some bonus features that really make the struggle worth it.
In T-800 Vision mode, you’ll look through the eyes of the Terminator as he hunts down the top symbols (T-1000, Time Orbs, the Connors, etc.) and pays you out for them. Although this mode is kind of rare,
you’ll have a chance of winning 125 times your stake. If the T2 hits a Time Orb then you activate a Free Spin Round, which gives you ten free spins.

In the Free Spin mode, the layout changes to a massive 1,204 payline slot and you can win up to a whopping 2,950 times your stake (we told you that it’s worth the struggle). With this feature, any T-1000
acts just like Robert Patrick does in the movie and morphs into whatever symbols will result in the highest payouts. It’s even more rare than the T-800 mode but it’s sweet when you get it.

Now, John Wayne isn’t a movie, but he’s one of the classic American western actors, so it seems fitting enough to put him on this list. This Playtech slot has a mere 25 paylines, but a lot of
bonus features to keep you entertained and winning money over time. The Wild West style music plays tribute the films of the rugged all-American cowboy and the background gives you a trip down
memory lane through his many, many films. 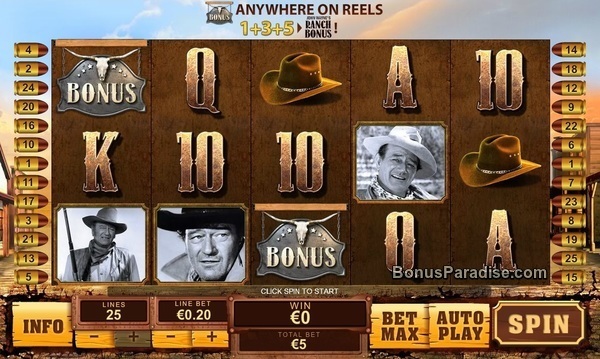 The Duke’s Badge Bonus is triggered if you get three, four, or five badges anywhere on the screen. When that happens, you get to pick one of the badges to instantly win a prize. The prize can be fairly
significant, especially if there are five badges on the screen. For three badges, you get anywhere from four to eight times your stake, for four badges, you get twenty to thirty times, and for the maximum
of five, you get 100 to 120 times your stake. This doesn’t happen terribly frequently, but it happens frequently enough to make it worth your time.

The Ranch Bonus is another quick moneymaker. This is your Free Spin Bonus Round. You begin this round in a ranch in front of a fence covered in cans, and six bullets for your six-shooter. For each can
you knock off you get a prize. The prize can be extra spins (you start off with only three and no multiplier), extra multipliers, additional wilds, a re-trigger, or more bullets for the Ranch Bonus prior to the
Free Spin Round. Once you run out of bullets, you start your free spins.

All in all, this is an excellent slot machine for anyone who wants to see The Duke ride in the saddle again and take a few glimpses into a simpler past while still playing for big bucks. Although it only has
25 paylines, it’s still a lot of fun and a great way to kill some time or make some extra cash. This is definitely one to play.
Reactions: Mike and Ellis

I lovvvvveeee the Terminator 2 Slot!
Reactions: Mike and Marina