Launched in December 2014, Microgaming’s Game of Thrones online video slot is inspired by an award-winning HBO TV series of the same name.

Since the TV show, which is based on George R.R. Martin’s books, enjoyed a great deal of popularity, the possibility of Game of Thrones
becoming a huge success among the online slot gaming community is quite high.

Game of Thrones exists in two versions—the 15-line game and the 243-ways-to-win game. Players can bet a minimum of €0.15 in case of the former and a minimum of €0.30 per spin in case of the latter. The most exciting feature of Game of Thrones is its collection of four free spins features, each of which comes with its own stacked icons and multipliers. 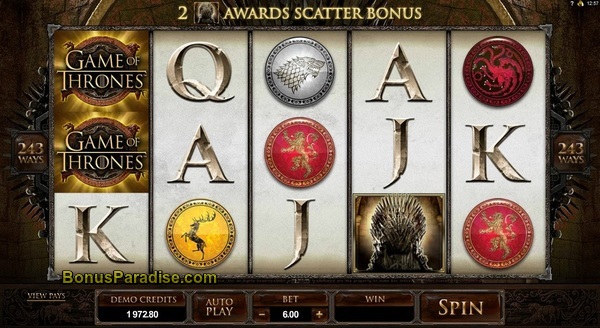 Players need to spin at least three Game of Thrones scatter icons to trigger the free spins. However, if they land only two scatters, they will win a random cash prize.

Game of Thrones slot has yet another exciting bonus feature, called the Gamble Trail. This feature allows players to view video clips of the popular TV series while journeying through Essos and Westeros.
The Gamble Trail comprises four levels, and at the end of each level, players are giving the opportunity to double their winnings by playing a simple coin flick game.

Game of Thrones is one of the loveliest creations of Microgaming with its bright color scheme, awesome animations, and detailed graphics. Needless to say, winning the bigger prizes is not that easy, but players will be surprised by the large number of smaller prizes the online slot game literally throws around. There is absolutely no doubt that Game of Thrones will become a huge hit, especially as it challenges players to win up to 121,000 coins.
Reactions: Ellis and Mike

I really like the Games of Thrones, but only the 243 ways slot..
Reactions: Marina and Ellis

Me to Mike! I am a big fan of slots with so many paylines.
I really like the Game of Thrones Video Slot.
Reactions: Mike and Marina
M

I really like rtg games but this slot looks smokin hot!
Should maybe try microgaming slots a bit more but my money always goes to fast.
Reactions: Ellis

Marky777 said:
I really like rtg games but this slot looks smokin hot!
Should maybe try microgaming slots a bit more but my money always goes to fast.
Click to expand...

I can really recommend Game of Thrones, I find it is one of the better paying Microgaming Slots.
I had a really nice win on it in the base game playing at 32Red ... 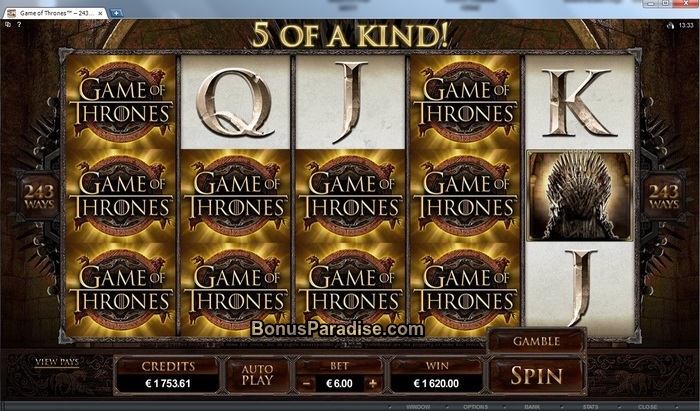 Due the stacked Wilds you can really get surprised
Reactions: Ellis and Goldharry

this is not my favorite,
the slot is not enough for me :
action , suspense and surprise ...

but wow Marina Congratulations on winning !!!