Go back in time to 1541 and join the exciting adventures of Gonzo. Off the coast of Peru, the Spanish were in search for their quest for gold.

Join Gonzo as he abandons the ship and starts his own Quest. Leave it to NetEnt to bring us an exhilarating and riveting video slot with some history.
The storyline will have you enthralled in your attempts to be in on his quest for riches.

It's got to be one of the hottest slots from NetEnt software. Gonzo's Quest isn't your average video slot. It is packed, fun filled adventurous 3D video slot with no spinning reels.
Instead you have blocks falling or cascading upon the reels and NetEnt has deemed the term the Avalanche effect. The symbols on the reels fall into place and create an incredible
screen visual. You'll be allured into the game play with the exploding sounds and graphics. 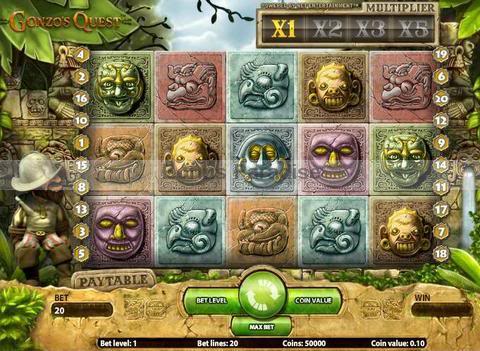 Gonzo's Quest has you exploring on 20 paylines that is spread across 5 reels and 3 rows. Players can choose the amount of their bet and number of lines played along with the amount
of their coin for each spin. Net Entertainment has designed their game interface with such ease, that new players will surely understand. With just a click you can start playing a fabulous
video slot. It always is an advantage for the player to familiarize themselves with the paytable. See what your spinning for and how to start the features.

A unique feature within this game is that the winning paylines explode and the next spin and starts the "Avalanche" effect. The "Avalanche" effect allows for additional blocksto fall and could
boost your payout for each consecutive win. The payout could be multiplied up to 5x's. Watch in the upper right corner on your screen as the multipliers increase for each winning payline.
1st win is 1x, 2nd is 2x, 3rd is 3x, the 4th win is multiplied by 4x and the 5th consecutive win is multiplied by 5x. If you get up to 5x's the win, you could really increase your bankroll.
Watch Gonzo catch all the gold after a big win.

All winning paylines pay left to right even the Free Fall symbol which could start an astounding and lucrative feature.
Gonzo's winning symbols are the Wild symbol which is a Question Mark in stone, Free Fall symbol, Silver Mask, Green Mask,
Gold Mask, Purple Mask, Snake in stone, Pink Mythical in stone and Teal Bird in stone.

When the Free Fall avalanche effect occurs, players could possibly receive up to 15 times the winning amount. Wow!
It starts when 3 or more Free Fall symbols appear in consecutive order from left to right. You will be in the quest zone and receive 10 Free Falls.


Gonzo's Quest slot game will have you in for a Spanish adventure of a lifetime.
Join Gonzo on his quest for riches and walk away a winner. Try playing your luck at CasinoLuck
Reactions: 5 people

Thank you for this wonerfull review Cat!
This slot looks really cool! :thank you:
Last edited by a moderator: Jul 3, 2014
Reactions: Kotsy
E

I just love Gonzo's, one of the best slots out there imo.
May I just add that you can actually get 20 free spins that can retrigger and during free spins payout is multiplied by 3x, 6x, 9x and 15x.
Well it's really cool, you'll just have to try! I don't know any game that resembles Gonzo's. Just be careful it's very addictive :smile:
Last edited by a moderator: Jul 3, 2014
Reactions: Kotsy, Ellis and Marina

Thanks for this nice Gonzo's Quest review, Kotsy
Love that video slot too.


Emmeline said:
I just love Gonzo's, one of the best slots out there imo.
May I just add that you can actually get 20 free spins that can retrigger and during free spins payout is multiplied by 3x, 6x, 9x and 15x.
Well it's really cool, you'll just have to try! I don't know any game that resembles Gonzo's. Just be careful it's very addictive :smile:
Click to expand...