Norse Mythology comes to life in this incredible Progressive Jackpot video slot. Hall of Gods™ will transpose the player back in time to the magical and mystical world of fantasy.
Be amazed and in awe with a mythical tale like no other. All relevant to the Gods of mythology, Thor is a major player in this video slot that you can play online for real money. He is the
son of Odin. He's known throughout comic books and tales. He has powers like no other. A hammer welding God that is associated with lightening, thunder and more, he brings Hall of Gods
to life and hold the key of his hammer to hitting that Jackpot. This mythical themed online video slot is provided by NetEnt software and allows the player to escape into the world of imagination.
It's part of an array of Progressive Jackpots with payout in the millions. Hall of Gods™ gives the player a chance to win 1 of 3 Jackpots. Now that's triple action at its best.

Be part of the winning team and spin for a chance of a Mega Jackpot, Midi Jackpot or Mini Jackpot. As you play, watch as all the Jackpots grow to astounding amounts. 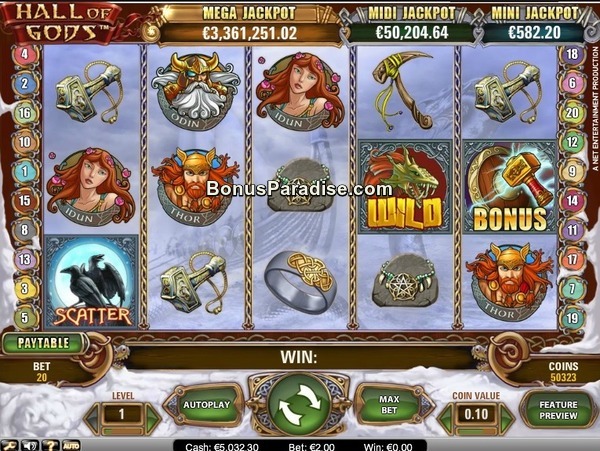 Hall of Gods™ Progressive Jackpot has a numerous amount of exciting features that include the Midgard Serpent which explands to wilds on a winning payline. Watch as the serpent takes over
the reel and amass some great wins. Free games can be won with Odin who is the Scatter and on your way through mythology, Grab a bonus game with Thor's hammer and go for the ultimate Jackpot.

Net Entertainment has become know for some of their lucrative online Progressive Slot games. Add Hall of Gods™ in there and you could become a millionaire.

Mythology continues with this 5 reel, 3 row, 20 payline Progressive Jackpot video slot.With NetEnt games, players have the easy choice of their bet amount, number of lines played
and the amount of their coin. The slot game is quite easy to understand. It's advisable to familiarize yourself with all the options and payouts on this one. We may put it in words, but until
you experience and test it out it's still in the players hands. Always remember, in order to hit the ultimate, Progressive Jackpot, certain rules apply with your betting.

All winning combinations pay left to right Hall of Gods™. At times, the payouts may not seem great, but the lore of the lucrative Jackpot is with the chance.
With so much going on in this Progressive Jackpot video slot, we'll break it down as easiest as we can.

The Wild symbol is the Serpent and only appears on reels 2, 3 or 4. The Serpent substitutes for all symbols except the Scatter and Bonus symbol.
When a winning payline includes the Serpent Wild, he will expand and cover the entire reel to increase the players winnings.

Winning symbols include Odin, Thor, Freya, Loki, Idun, Ring Silver Hammer, Stone and Necklace, Hatchet and Treasure Chest of Apples.
Each and every symbol relates to the Nor Mythology.

Every spin will give the player an opportunity at the big Jackpot. When 3 or more Bonus symbols appear, a screen will appear and players
will have to take Thor's hammer to smash their choices. This is your chance to get 3 like symbols to win that amount. The ultimate goal is to
smash your way to the Mega Jackpot. Even if you don't get the Mega, you could still win the other two Jackpots or end up with some great coin.
The three Jackpots to be hit are Mega Jackpot, Midi Jackpot and Mini Jackpot

Playing the game, when players receive 3 or more Scatter symbols, you'll be rewarded with free spins.
All winnings during the free spins are multiplied by 3x's. The feature can also be re-triggered.
I've always enjoyed the free spin feature in any online slot I've played.


Play Hall of Gods™ online video slot in the Casino Gold choice at HeyCasino.
You could be the next Jackpot winner!
Last edited by a moderator: Mar 4, 2013
Reactions: Mike and Marina

The Hall of Gods Mega Jackpot is again over 3 Millions Euro.
I think the jackpot will be hit soon again!
Reactions: Goldharry, Mike and Kotsy