A lucky winner at the leading online gaming site, InterCasino, is celebrating her new status as instant millionaire and can still not believe her luck.

The player, known as Amber, tried her luck on Native Treasure video slot game and landed up taking home the astonishing sum of $1.3 million for her “efforts”.
As this is a non-progressive jackpot game, the fact that Amber hit such as high prize is even more surprising.

In a press release put out by InterCasino, the group said that “this could very well be one of the biggest non progressive wins ever paid out by an online casino.” 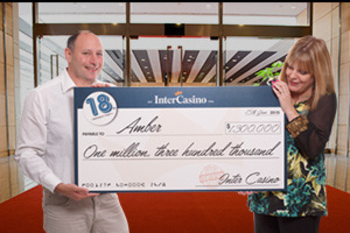 Amber recalled how the events leading up to her millionaire win played out. She said that shortly after she began playing Native Treasure at InterCasino, she hit 100 free spins on the game.
If that wasn’t grand enough in itself, she hit another 100 free spins and then another. In total, the player grabbed 1,600 free spins on the game – giving her over 4 hours of free play on the
game and a total prize of $1.3 million at the end of the day.

Too stunned to comprehend the magnitude of her win, Amber called customer support at InterCasino and was told that she was, indeed, a new millionaire.

When interviewed after her win, Amber said: “I could not believe my eyes. I kept saying ‘this can’t be true’ but it was and I won an amount of money I could not have imagined.

Asked what she planned to do with her jackpot win, Amber said that she has already given some of the cash to her family and purchased a new carpet for her home.
Another big plan is to go on a luxury holiday with her husband and young child, possibly on a cruise.

Amber was visited by representatives of Inter Casino and personally handed a check for $1.3 million, along with glasses of champagne to celebrate.

Peter Marcus of InterCasino said that the group was thrilled when players walked away with “life-changing wins”.
“It’s not every day you get to be a part of history in the making,” he said.

It is also interesting to note that Amber is a second-generation player at InterCasino, with her mother being one of the
first registered players at the casino in 1997. The site has been in the industry for 18 years and continues to reward players on a daily basis.
Reactions: Mike