A childhood classic fairy tale comes to life from Net Entertainment. Jack and the Beanstalk will have you taken back to your childhood and live the fantasy every wee one imagined. Leave it to NetEnt to take this classic, English fairytale for children and turn it into a very popular online video slot that you can play as adults for real money. This 3D, highly animated slot has innovative features that players will love. It's an eye catching slot game with nice graphics and fantastic sounds to set the mood for spinning.

This all time favorite has been made into movies, books, plays and any genre that will have you believing in this classic fable. So many different versions exist, that it was only a matter of time before it became something for the adult world to play.

For those of you that have missed out on this childhood classic, it's all about a little boy named Jack. He was raised by his widow mother and times were tough. They were very poor. His mother sent him to market to sell their cow for money. Jack never made it to the market. He met a man on the way and Jack sold the cow for some beans. He was told they were magical. As any young boy he believed it. Needless to say, his mother was very angry with him and threw the beans out the window. The next morning a huge beanstalk appeared and Jack climbed it up into the clouds where he saw an incredible castle. Fast forward to the adult world of online slot play. I love it. 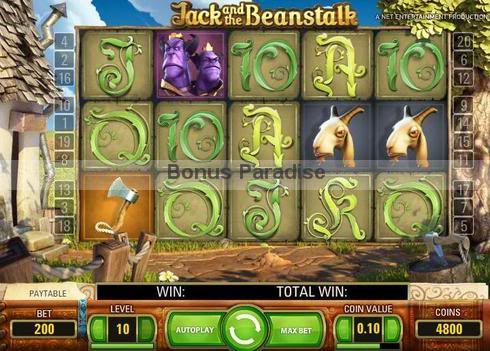 Jack and the Beanstalk is a fun, fast paced video slot online from NetEnt that has 20 lines for Jack to climb for his riches. It's on 5 reels and 3 rows. NetEnt makes their games super easy for anyone to understand how to play them. Just look at the screen and you can determine the amount of your bet and the number of coins to play per bet. Players can choose 1-10 coins. The bigger your bet, the higher your payout on winning paylines.

Jack may be climbing straight up the beanstalk, but all winning paylines pay left to right with a few exceptions.
Winning symbols include Jack, Two Headed Giant, Goat, Hatchet, Watering Can, Ace, King, Queen, Jack and Ten.
Was surprised there wasn't a cow amongst the winning symbols. hmmm

The Wild symbol which is the Jack in the Beanstalk logo, substitutes for all symbols and when it appears in a winning payline it pays out 3 times the amount.


Now look at all the special features Jack and the Beanstalk has.

Jack in the Beanstalk is one fun slot to play. With each spin, you could unlock anyone of the exciting features.
Last edited: Sep 20, 2014
Reactions: Mike, Ellis and Marina

Jack and the Beanstalk is still one of my favorite slot games from Net Entertainment.
Just recently I had all 5 Wild Harps in the Free Spins Feature.
Reactions: Ellis and Mike

I always try some spins on the Jack and the Beanstalk at the NetEnt Casinos because it is a very nice video slot to play!
Reactions: Marina and Ellis

This is such an amazing Video slot with really great payouts!
thank you for this beautiful review Kotsy!
Reactions: Mike and Marina