At the beginning of February 2016, the Swedish online casino software giant NetEnt announced that it would be launching a trio of online casino slots with a distinct music theme.
Guns ‘N Roses slot was the first to go live at NetEnt powered online casinos, and the next in line was Jimi Hendrix slot. The game has been released on 21st of April 2016.

The iconic musician and guitarist, Jimi Hendrix was famous for his hard-hitting performances of the 1960s, and although his career spanned only four years due to his
tragic and untimely death at the age of 27, it is clear that he deserves the dedication of a video slot game. NetEnt’s tribute to Jimi Hendrix pays great respect to the singer,
thanks to the use of 3D graphics and original footage and soundtracks by the man himself. Enjoy toe-tapping hits by Hendrix as you spin the reels and reminisce about Woodstock,
Flower Children, and Peace signs. Classic Hendrix titles in this game include Little Wing, Purple Haze and Crosstown Traffic. 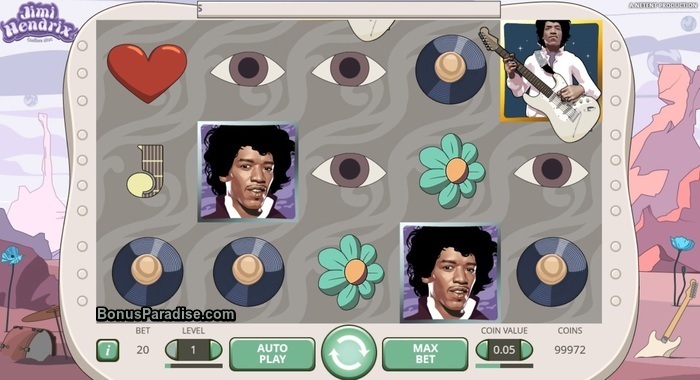 The Jimi Hendrix slot game is a five reel, 20 pay line title which boasts no less than six different features.
Two of them appear in the base game, while the other three appear in the free spin features.

Respins and wild transformations in the base game:


The Pick and Click feature is triggered by landing three scatter symbols on reels number 3, 4 and 5, and you stand to win one of four prize features.

You can wager with coins ranging from 0.20 to 200.00 in size when playing the new Jimi Hendrix slot, showing that NetEnt had all levels of players in mind when it created the new title.
The top jackpot is 400 coins.

If you’re into retro slot games with a modern touch, and love the music of the 60s, then Jimi Hendrix slot is the game for you.
The brilliant graphics, animations and sound features are complemented by no less than six bonus rewards.