Launched exclusively at Casumo Casino on the 14th of August 2019, Kingmaker is the newest slot by Big Time Gaming that will hit other BTG-powered casinos on the 28th of August 2019.
Announced as a slot that would exceed all your expectations, Big Time Gaming’s Kingmaker features the popular Megaways™ mechanics and offers engaging gameplay packed with Multipliers and Free Spins.

Judging by its title, you are probably expecting an extreme variance and a game that will take you to the highest of wins. Eager to see whether the slot will make you a king?
Well, you’ll need to enter the medieval kingdom, spin there reels the longest you can, and raise the banners to deserve your victory and be crowned a king! 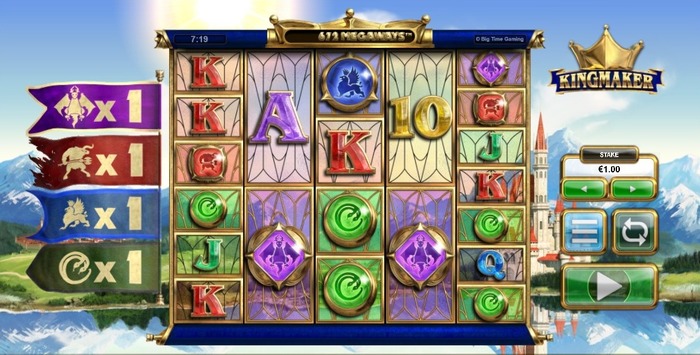 The game takes you in medieval times, at the foot of a snow-covered mountain range, in the centre of which the huge castle is set. In front of the castle, you can see a crystal-clear lake and the moving clouds reflected in it. The sun is shining bright and the skies are blue, which suggests a “calm before the storm” setting.

And that’s exactly what happens here. Things heat up as soon as you start spinning the reels. You will see four different coloured Gems.

The game offers a Wild symbol, which substitutes for all symbols in the creation of winning combos, and appears on all reels, except for the first one. The Wild does not replace for the Scatter, though. The Scatter is the Crown symbol. If you see 3, 4 or 5 Crowns appearing anywhere on the reels, you should know that you’ve triggered 7, 12 or 20 Free Spins, respectively.

Big Time Gaming said that it had flipped slots on their heads to make incredible new mechanics that would provide players with an element of surprise. As it turned out, there is no new mechanics usedhere, but the well-known Megaways™, only in a slightly different form. Some may be disappointed by this change, others may appreciate it. But as Big Time Gaming reassures, you’d probably like the change.

Instead of designing the game with 6 reels, as it usually does in other Megaways™ slots, Big Time Gaming has decided to create Kingmaker with 5 reels. Therefore, the Megaways™ mechanics can deliver up to 16,807 ways to win, as opposed to the usual 117,649 Megaways™.

As the developer indicated, Kingmaker is crowned with Max Megaways™. Therefore, you will get a different number of ways to win on each spin, but during the Free Spins, you will see the entire reel set expand and reward you with the max possibilities to win.

The Megaways™ and Multipliers combined build up the intensity and tension throughout the gameplay, to approach the climax, which happens in the Free Spins.

Considering the slot is, as expected from BTG, a highly volatile one, and thanks to the complex and engaging gameplay with Megaways™ and Win Multipliers, it can take you to wins of 40,000x the stake! You will retire in your throne room to count your treasures the minute you grab the huge win!
Reactions: Mike