Players who have played the Zeus slot game from WMS will appreciate the sequel to the game, titled Kronos. This newer video slot offers a similar theme and present players with ongoing slot action
and the chance to win some high rewards. Like Zeus, the game is played on five reels and 20 paylines. The game allows players to share in the Treasures of the Gods with some outstanding wins and
it is an affordable game, making it attractive to new players. The unique thing about this Kronos game is that payouts will be generated with wining combinations from left to right as well as right to left.
This increases the chances of winning and will drastically increase the payouts offered.

As with most video selections from WMS (Williams Interactive), players will have complete control over their betting amounts. The game is primarily a penny machine, but wagers can be increased
to €3 per payline. Unfortunatly, only one coin can be played on each line, so the maximum bet is just €60. This may not be enough to attract high rollers to the game, but it does present some nice
betting options for low and mid rollers. 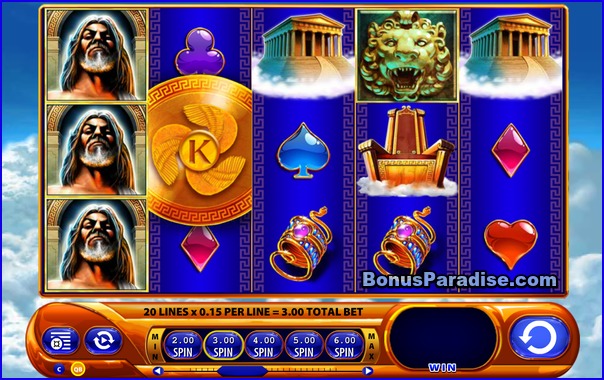 When spinning the reels, there are some amazing symbols that will appear. The base game regular symbols include Kronos, temple, Pegasus, throne, bracelet and standard playing card icons.
All of these can offer impressive payouts when they appear on an active payline. In regards to special symbols, there are few of those as well. One is the wild, which looks like a stone statue of a
lions head. This wild can only appear on the middle three reels and will substitute the regular game symbols.

Another special symbol is the scatter, which is represented by the gold coin.

When three, four or five scatters do show up in a single spin, the bonus round will immediately begin:
During this round, the wilds will appear as stacked symbols and players can still collect payouts from both directions on the reels.
It is also possible to trigger more free spins in the round, so this is an exceptional opportunity to boost payouts.

Having the chance to win more than 100 free spins is a great feature of the game and is one that many players enjoy. This is where most of the game payouts will be generated,
especially since stacked wilds are in play. With this bonus, the payouts can far exceed any standard game payout, offering the chance to walk away with thousands in returns after
triggering the bonus. Unfortunately, Kronos does not offer any other bonus game, so players will have to strive for the free spins to enjoy the best game payouts.

With a Greek mythology theme, the game is appealing to many, especially those that have already played Zeus online. This game does not differ much from that original game, but WMS has
added the right to left payouts, so the game is beneficial. Since it is a penny machine, it is a perfect selection for any new player or low roller. The game is also available in a free mode for any
player that just wants to play for entertainment.

Even though this may seem like a basic video slot, once players get into it, they will find many opportunities to collect massive payouts. With the stacked wilds as well as some stacked symbols,
it is possible to create multiple wins on a single spin, offering higher payouts than on other video slot games. Having payouts generated from both directions is also a nice addition to the game.
With Kronos, the payouts may not be huge, but what can be won during the bonus round is pretty impressive.
However, it seems that his free spin round may be difficult to trigger, so some players may be put off by the lack of bonus options.

Overall, Kronos is a solid game that is a sequel to the Zeus slot hit.
With this game, players will embark on a great Greek journey in search of high rewards and an exciting slot experience.

Kronos is just a great WMS Slot and so happy that it is available online.
It has great payouts so you really can win big.
Reactions: Mike and Marina

Can you imagine getting 100 free spins? I'd be in my glory as I strive for free spins.

The stacked wilds can bring an impressive win and the wild symbol as well.
Reactions: Mike