NetEnt Does it Again! Progressive Slot Jackpot Hit for Millions

If there was ever any doubt that NetEnt wasn’t one of the top-paying online casino software companies in the business, the group just proved its worth once more.

NetEnt was proud to announce to the industry that a lucky player hit the jackpot on its hugely popular Hall of Gods slot game earlier this month.
As a result, the player took home over EUR 6.7 million. 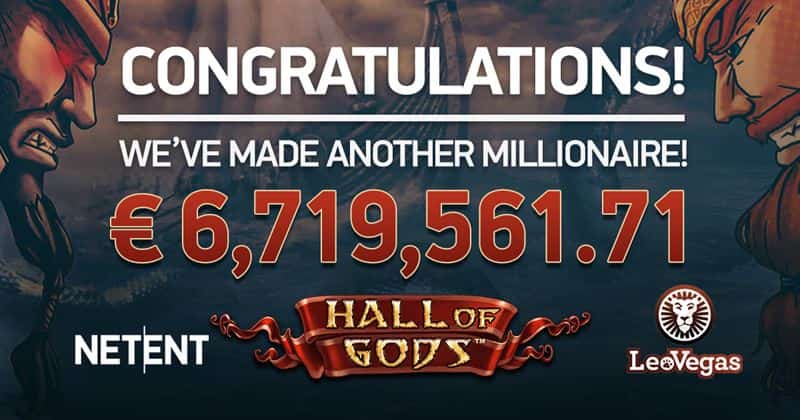 What makes this win exceptional is that it was paid out to a player who tried his luck on Hall of Gods slot while playing on his mobile phone.
This was the highest jackpot ever won on a mobile slot game in NetEnt’s portfolio, and the largest progressive jackpot overall by NetEnt this year.

The player recalls that he decided to play at LeoVegas online casino when he got home from work and accessed the site through its mobile app.
After an easy EUR 10 stake on Hall of Gods mobile video slot, the player suddenly hit the jackpot, leaving him quite dumbfounded.

”I’m still in disbelief and shock,” said the man, a member of LeoVegas Mobile Casino who lives in Sweden.
“I simply can’t believe I won. I was at home playing on my mobile, so it was a great feeling when I realized I’ve literally hit the jackpot.”


NetEnt proudly announced the latest win on one of the slot games in its portfolio.

“It seems our players can’t stop winning at the moment, after another one of our games saw a multi million Euro jackpot drop,” said the chief product officer of NetEnt, Henrik Fagerlund.

“By giving operators access to the largest online jackpots in the iGaming world, NetEnt provides opportunities to promote the dream of a truly life-changing win to their players.”

“We’re proving once again to be a leading force in the mobile gaming world and hope this good luck continues in the coming months,” said Fagerlund.


Hall of Gods slot carries a fantastic theme based on Nordic mythology, boasting all the characters such as Thor and other gods.
Suspenseful music, excellent graphics and well-thought-out animations make Hall of Gods an entertaining option for all players – and that’s even before we check out the winning potential!

Players will find features such as the Wild Serpent which gives a delightful display of slinking across columns or bursting frightfully out of the water.
There are 20 free spins up for grabs thanks to the Two Ravens scatter symbol. A bonus game is activated by Thor’s Hammer symbols.