Mathematics behind Poker: A Beginner’s Guide

While you may be able to win a game of Poker without the conscious use of mathematics, having an arsenal of mathematical knowledge about the game will give you a definitive advantage.
Poker is one of the most popular gambling games out there because it relies less on luck than most gambling games; you, the player, are able to pour a great deal of skill into the game to
increase the odds in your favor. In fact, you may be using math during your poker games without even realizing it.


The Theory of Probability

What are the odds that a certain event will occur at a certain time? This question is one of the defining characteristics of someone who is interested in the theory of probability. The concept behind the theory
of probability has existed for ages. Since the foundation of early civilizations, gamblers have been questioning the probability of events. People have always wanted to know with precision and accuracy how great
or how poor their chances of victory were. Although the question has always been on the forefront of mankind’s mind, the ability to study the mathematics behind probability has only recently been made possible.

Poker is comprised of what some people call “dependent events.” This simply means that each move is dependent on the last - each card drawn has an impact on the next. Games that involve the use of a
roulette wheel or dice would be examples of games that are composed of “independent events”—games of chance. Poker, however, can often be assessed in a mathematical light due to the ease with which
predictions can be made. For example, in a game of Poker, the deck cards available continue to decrease as the game goes forward. Thus, if you are looking for an Ace and no Aces are drawn in the first
fifteen minutes, the odds of your receiving an Ace in the future continue to increase.

Mathematics are most often used in the game of Poker when a player is on a draw and wants to know whether it is best to fold or not. Seasoned poker players always know when and when not to call, but players
without an understanding of math tend to play hesitantly, making the best guess they can given the small amount of information they have. By learning the mathematics behind poker, you may be able to calculate
the pot odds (the ratio of the current pot size to the expense of a possible call). Learning to calculate the pot odds gives you a distinct advantage, allowing you to complete your draw with intelligence. Such a skill is invaluable in a game of poker, especially when playing with individuals who are more experienced than you are. 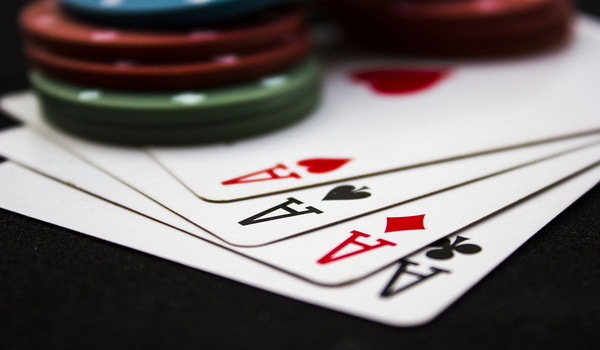 Expected value means exactly what it sounds like: the money amount expected in winnings or losing on average per play. Your ultimate goal, obviously, is to make a play that has the very largest expected
value. Expected values can be calculated for nearly any poker function, including bets, calls, and folds. If you have a decent knowledge of gambling mathematics, you may be able to work out which plays will
gain money, which will lose money, and even which will win more in comparison to other plays. The probability of a positive possible outcome is abbreviated “+EV” while the probability of a negative possible
outcome is abbreviated “-EV.” Being able to calculate the expected value of a play is absolutely imperative when determining which hand to play and when.

Although mathematics can be used to predict things with a great degree of accuracy, you must remain aware of the fact that even highly unlikely events may, in fact, occur. Seeming impossibilities on the table
have been known to shock even the most seasoned of players. If you are a beginner, bad beats are actually good news. Players with lack of experience and lack of mathematical application are often able to stay
in the game simply due to bad beats. Beginners beware, though: poor poker players may interpret a good stroke of luck as raw skill and continue to play unwisely. Avoid detrimental mistakes by relying on more
than your luck: try crunching a few numbers every now and again.

Psychological knowledge and people-reading skills are definitely useful when sitting down to play a game of poker. As it turns out, math may also be a great
gameplay weapon to add to your arsenal of poker knowledge. Enjoy learning the ins and outs of Poker by taking a look at the mathematical side of things.
Taking the time to learn something new might be the determining factor of your next poker round: will it be a winning one or a losing one?
Reactions: Ellis and Mike