There’s no other developer who knows how to make its fans their dreams come true like Big Time Gaming. Thanks to its revolutionary mechanics Megaways, the developer actually has the power to redefine any hit slot, boost its payouts and make players’ experience unrivalled.

With no further ado, we are glad to inform you that BTG has combined everyone’s favourite board game Monopoly with its mega-popular Megaways mechanics, to deliver to you a 117,649 ways to win slot called Monopoly Megaways! 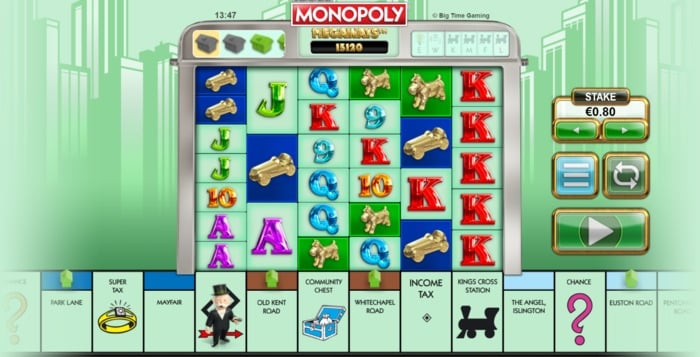 This Online Slot Game is the product of the combination of the two most popular franchises in the online gambling industry: the Monopoly and the Megaways. Monopoly, as you are well aware, is a board game which has sold millions and millions of copies since its release in the 1930s. And Megaways… well, is the engine that changed online gambling for good.

However, Big Time Gaming has also thrown in the Reel Adventure and Reactions to the pot, too, making sure your experience is one-of-a-kind.
Players may know Reel Adventure from the popular Video Slot Holy Diver, it was the first slot for Reel Adventure Series slot from Big Time Gaming.
To sum up, Monopoly Megaways is a Monopoly slot like you’ve never seen or played before. It offers many ways to win, Multipliers, Free Spins, and Mr Monopoly’s generous freebies, resulting in a brilliant mix of big potential and super-fun gaming.

In terms of symbols, you will see the standard playing cards from 9 through A, in addition to the Monopoly-themed battleship, race car, and dog. The highest-paying symbol which delivers 50x the stake payouts is the top hat. The M letter is the wild which substitutes for all symbols and appears on all reels except the first one.

Now, the game, obviously, comes with Cascading Reels, first and foremost. Whenever you form a winning combo, the winning symbols are removed from the reels and new ones land to fill in the gaps on the reels. This can lead to consecutive wins, considering the whole process repeats for as long as you land winning combos.

Central to the gameplay is the Reel Adventures mechanics. This is where you see Mr Monopoly. He’s going around the board every time you make a win.

Depending on where he lands, one of 5 things may happen.

Why is the number of houses important, you may ask?

Well, you need five houses on a Street in order to trigger the Free Spins, if you haven’t already thanks to the Chance.

You initially get 8 Free Spins, however, the number can increase depending on the Streets with five or more houses or the Railway Stations you own.
With each additional Free Spins trigger, you get 3 Free Spins and Multipliers added for the Utilities you won. Each landing on a Property boosts the Multiplier by 1x for each house. For each Train Station, you get 1 extra Free Spin. For each Utility, the Multiplier is boosted by 1x or 2x. For each Chance, you get Free Spins or Max Megaways.

Therefore, during the Free Spins, Mr Monopoly continues walking around, rewarding you with max Megaways, Free Spins and Multipliers, to eventually lead your way to payouts of up to 15,000x the stake!

Big Time Gaming announced the game as a match made in heaven for all Monopoly and BTG fans. That was due to the fact that the biggest board game brand in the world met the arguably best maths in the industry.

Then, the developer went on saying that Monopoly Megaways was designed to deliver a game to suit every type of player, with a slick land-based feel and engaging mechanics, giving players the feel of a board game with the thrill of an ultra-modern slot machine.
Reactions: Mike