In September 2016, the Swedish software group, NetEnt, released the third and final video slot in its NetEnt Rocks music-inspired trilogy of games.

Motörhead online slot has been hailed as one of NetEnt’s best titles, thanks to the incredible images and animations, music and bonus features.
This NetEnt slot promises to make a mark for itself in any games lobby of online casinos carrying NetEnt titles.

NetEnt pays tribute to the English rock band that was founded in 1975 by Ian Fraser “Lemmy” Kilmister. The group went on to release 23 albums over a career spanning 4 decades, selling over
30 million albums over the years and entertaining fans with titles such as Overkill, Ace of Spades and No Sleep ‘til Hammersmith. The idea to create a game based on Motörhead came shortly
after the untimely death of Lemmy in December 2015. The game is the third in the series, following the successful release of Guns ‘n Roses slot and Jimi Hendrix slot. 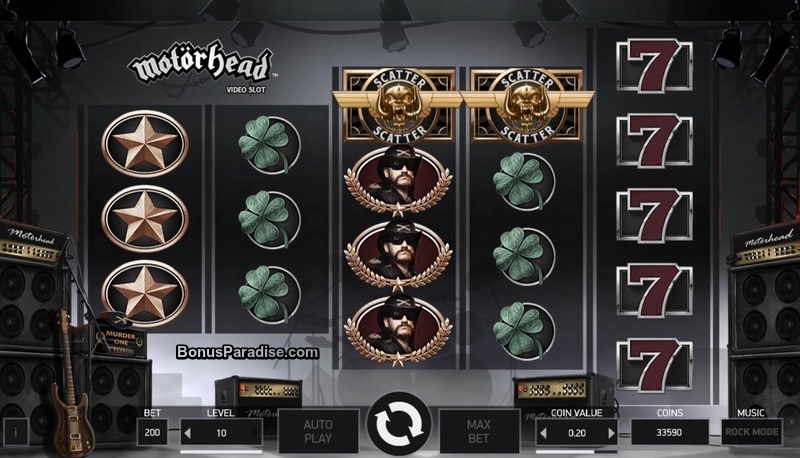 The theme of this game shines through thanks to flashing lights, original footage, wild rock music and legendary soundtracks.
The Motörhead slot game has some cool features, such as the chance to activate a “rock mode” that ups the volume of famous Motorhead soundtracks while you spin the reels.

Motorhead slot is a 5 reel, 76 pay line game that can be enjoyed by all players, from penny pinchers to highrollers. Wager on Motorhead from 20c to EUR 200 per spin.
You can play the game on desktop, mobile or table devices. The game boasts three bonus features, which are elaborated on in the section below.

In addition, you will find the Ace of Spades wild symbol which stands in for most other symbols in the game to create winning combinations. There is up to 570 times your
stake to be won on each spin of the game and, combined with the three bonus features and wild symbol, you are looking at a game which has the potential to pay out big jackpots.

Mystery Reel Bonus Feature: One or more reels in the base game or free spins feature will be Mystery Reels, made up of mystery symbols.
These symbols have the potential to transfer into a randomly picked symbol in order to increase your winnings.

Free Spins Feature: When you land three scatter symbols anywhere on reels three, four and five while playing the base game, you will be rewarded with 10 free spins.
During the Free Spins Feature, the Mystery Reel Bonus Feature is taken up a notch and you can land mystery reels that contain mystery symbols as well as wild symbols.

Bomber Feature: This randomly triggered feature is found in the base game of Motorhead slot before your spin.
Explosions land on the reels and create at least 10 overlay mystery symbols. These bring with them big wins thanks to the cluster of mystery symbols on the reels.