Other Games Played at Online Casinos

If you’ve had tunnel vision while playing at your favorite online casino, you might have missed some recent additions. The technology, graphics, and stories that have been worked into newer slot
games is outstanding, so it’s understandable that you’d go right to what you already know you like. However, more online casinos are adding in what they refer to as “soft games” or simply “other games.”

Call them what you will, they’re still tons of fun to play and can offer some great chances to win big. Here’s a look at some of the newer alternate games that have been arriving at online casinos.

It’s unclear why some people insist upon calling these slot games, because they don’t generally resemble a slot machine in any way, shape, or form. Instead, they’re arcade games, which allow you to
wager and win, usually based on skill. For instance, Microgaming released Max Damage and the Alien Attack. It feels very much like an updated version of the classic Galaga, because you operate a
ship with the intent to shoot down spacecraft. Your shuttle is anchored to the bottom of the screen, and you can move it left to right using the arrow keys on your keyboard. UFOs descend, and as you
blast them to smithereens, you’re awarded cash, as well as other items that can help you throughout the nine-level game. 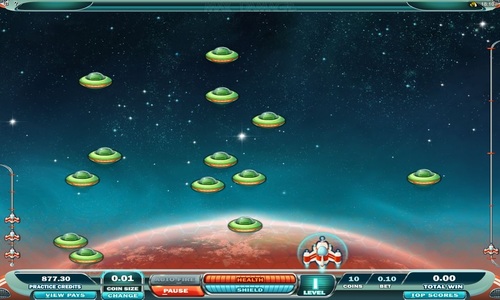 There aren’t too many like this that have been released just yet, but the trend is likely to continue as developers bridge the gap between social gaming and casino games. Microgaming did a fantastic job
with the animations and effects in Max Damage. If you’d like to try your hand at it, you can play free or for cash at 32Red Casino.

Granted, you could place a bet on a sporting event at any time, but then you have to wait for the event to happen, wait for it to play out, and then wait for payment. A few software developers have
come up with games that mimic the experience in a virtual world. Premier Trotting is another Microgaming selection that breaks with tradition to deliver a unique experience. They’ve left no stone
unturned with this game, and allow you to inspect jockey stats, horse information, track conditions and even examine the odds before you wager. Once you’ve decided how you wish to bet, you can
watch the race play out. If you can’t handle the suspense or don’t want to wait three minutes for the race to finish, you can skip it and just see who won. Guts! casino has Premier Trotting available,
and it can be found in their “Other Games” listing.

There are others that still resemble a slot game, but play a lot differently. Again, Microgaming has made a couple of these, and one of the most popular is called Germinator. Rather than reels,
though, gameplay is done on a 6x6 grid of cartoon germs. Your wagers are still placed on a per-line basis, and the goal is to get matches of at least three in a row, either horizontally or vertically,
to kill them. When you succeed, more germs drop in from the top of the screen, and any additional matches are automatically popped away too. Germinator can be found in the “Soft Games”
section at Royal Panda Casino.

Another game style that is starting to work its way into online casinos is puzzles. Star Games has one simply called Jewel Magic, which allows two players to compete head-to-head. Much like
Germinator, the game is played on a large grid, and the goal is to get three matching jewels in a row. The jewels each sit upon a black square, and as they are cleared by matching, the jewels will
replenish, but the black square disappears. Players are able to swap adjacent jewels with the click of the mouse as well. When all the black boxes have been removed, a winner is declared.

This genre is used heavily by NetEnt and contains an array of options designed for incredibly fast play. Among them is their Football Cup game, which is football in the traditional sense,
and not American football. The game gives you five balls to try to kick past the goalie. Although it literally takes only a matter of seconds to play, you can win up to 40,000 euros with each
2-euro bet. Like Premier Trotting, Football Cup can be found in the “Other Games” area at Guts Casino.

Casino software developers are continually coming up with ingenious alternative games to wager on.
You’ll find everything from traditional board games, to darts, and even pool, depending on which casino you like to play in.
Reactions: Ellis and Mike

Sometimes I like to play a Arcade Game like the examples you gave above or try a scratchcard.
But always stick to the slots and videopoker games
Reactions: Marina

Online slots are my favorite of choice for real cash. But occasionally I love to play dominoes and a few arcade games.
I really wish some of the Online Casino's would incorporate Dominoes into their games. They would surely have me hooked.