NetEnt’s branded slots collection keeps on growing - now with another Rock Band themed online slot. This time, the developer has added the long-awaited Ozzy Osbourne Video Slots™! to its portfolio, which is set out to appeal to the mass audience. 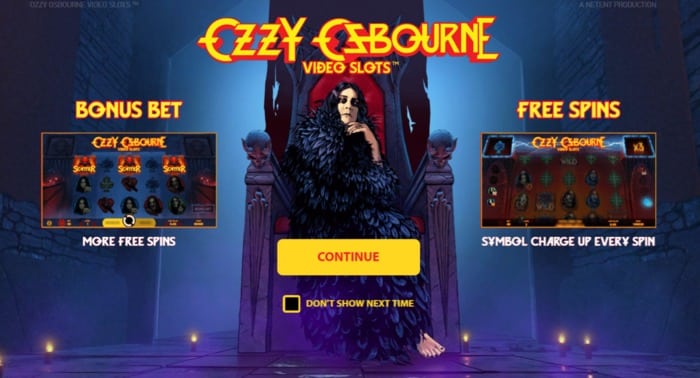 If you’re not familiar with heavy metal, Ozzy Osbourne is the lead singer of the iconic band Black Sabbath. And NetEnt developed a slot dedicated to and in collaboration with the global megastar! Yes, that’s right, Ozzy himself helped with the creation of the slot!

You will see the Prince of Darkness sitting on his throne while you’ll be listening to his epic track Mr.Crowley blasting from the huge speakers.

The masterfully-designed 1980s-style slot with comic book graphics takes you in a dark, gloomy and sinister temple, with the reels set on its very entrance, with two demons on the sides.

On the reels, you will see the crucifixes, ravens, skulls and roses as the lowest-paying symbols. All high-paying symbols are symbols with Ozzy himself, in different positions. The Wild is the Devil Bat symbol, which will play its usual role of a substitute for all symbols, except the Scatter.

Now, just like Ozzy’s rich, notorious life is filled with wild events, so is the gameplay in the Ozzy Osbourne Video Slots™ slot.

The first thing you need to decide on even before you start playing is whether you’d like to play using the Bonus Bet option on or off. With it on, your bet amount will double, but in turn, you’ll get several benefits. You’ll get better bonus frequency, hit frequency, as well as higher Multiplier values during the gameplay and an extra Free Spin when you trigger the respective bonus games.

The Scatter only appears on the 1st, 3rd and 5th reel. Whenever you land 2 Scatters during the base game, you’ll be awarded 1 Respin as a second chance to triggering the Free Spins.

If the Symbol Spinner chooses a Scatter, you’ll see the Bat Head on the Feature Spinner triggering the Free Spins after the Respin.

However, there are four other features that can appear on the Feature Spinner.

Should you land the 3 Scatters the traditional way, there will be no need for this chain reaction. You will get 4 Free Spins without the Bonus Bet active, and with it active, you’ll get 5. During the Free Spins, the Symbol Charge Up feature will be triggering on each spin. If you get a Scatter in the Symbol Spinner, you get one extra Free Spin. The maximum Free Spins you can get are 7.

NetEnt presented the game as an electrifying slots masterpiece that was brought to life with licensed music from Ozzy’s catalogue as a solo artist and illustrations of the performer himself. NetEnt’s Director of Games Bryan Upton said that Ozzy was the legendary rock star whose name went beyond the music industry. Upton said that while he was the Prince of Darkness, Ozzy had quite the colourful career and they were ecstatic to have worked with him for his latest mastery gig. With an exciting theme and awesome gameplay, Upton said, Ozzy Osbourne Video Slots™ would appeal to his fans and a wide cross-section of slots players equally.

The Chairman of Global Merchandising Services, Ozzy’s brand and merchandising management partner Barry Drinkwater said that they have been waiting impatiently for the Ozzy Osbourne Video Slots™ release ever since they have signed the partnership with the developer. He shortly but sincerely commented that they were delighted with the final product.
Reactions: Mike