Don’t Tell a Lie – Your Nose Will Grow

Pinocchio is Alive and Well, Living in a New Slot Game

As announced at the International Casino Expo (ICE) 2015 in London just recently, BetSoft has now released their new interactive 3D slot game, Pinocchio. This one has generated a lot of anticipation,
as BetSoft is well known for their quality graphics and exciting gaming experience. There are a number of twists to this game, as you may well expect from their other offerings. The story of Pinocchio
has been a favorite of children for many years, making the encapsulation of the puppet-turned-boy into a slot machine a natural attraction to slot players, who are familiar with the story from their youth.

Pinocchio is available in several languages, and in both desktop and mobile platforms, under the company’s Slots3 brand of games. Mark McKeown, BetSoft sales and marketing manager, said,
“Characters have always been one of the most important components in our Slots3 line. Beloved old Gepetto, the eponymous boy who fiercely wishes he were real and the wise Fairy who can make
that happen all drive the story forward, charming players and creating excitement about what the characters will do next." 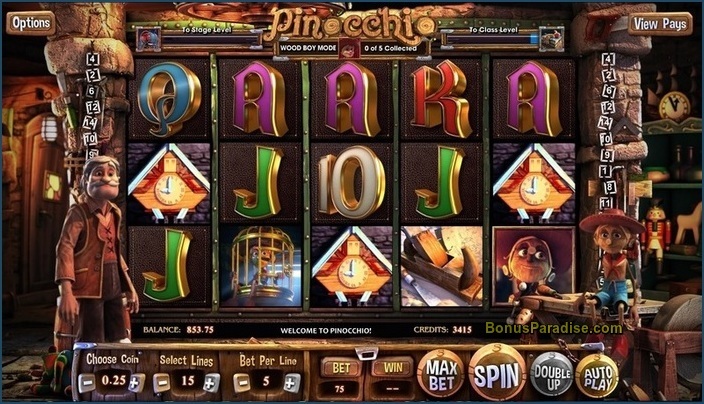 Although there have been several iterations of Pinocchio slots or video games over the years, the BetSoft version is a totally different experience for players, with its advanced audio, high-resolution
graphics and animation, and extremely high video quality. The game is already available at LeoVegas Casino and should launch soon at Vera&John Casino.

Pinocchio includes bonus features such as Fabulous Fairy Respins and Reel Boys (which includes Moving Wilds). The game consists of five reels and 15 paylines, and includes some of your favorite
charactersfrom the original story. It’s this character recognition that will keep players entertained and engaged with play. Character interaction has been associated with other BetSoft games, and
Pinocchio continues that tradition. Bonus features enhance the playing experience, and have become extremely popular with slot players.

This is a true cinematic video game, with high-quality graphics, animation, and audio effects. McKeown stated that the quality of the Pinocchio game is “unmatched” in the industry.

Two other new games "Rise of the Dragon" and "Money Maker" are also due for release in the near future. BetSoft currently offers over 150 games of several varieties, designed to bring
quality gaming experience to players. Some of their most popular titles include 2 Million B.C., Arrival, Boomanji, Good Girl - Bad Girl, Madder Scientist, At the Copa, among many others.

These new offerings bring even more gaming excitement provided by BetSoft, including some of their more recent launches such as Sugar Pop! and Dr. Jekyll & Mr. Hyde.
It also continues the BetSoft themes of applying traditional stories to gaming, such as their Snow White and the Poison Apple slot.

In the past few months, BetSoft announced their partnership with Picante Gaming. Picante is another game developer creating games powered by Global Gaming Labs (GGL) software. Under the terms
of the agreement, Picante will be enabled to offer their players a number of BetSoft’s most popular games, notably the Slots3 interactive 3D slots as well as the ToGo offering of mobile platform games.
Picante anticipates having the BetSoft games available on their website in the very near future. This partnership combines Picante’s offering of live games with the high-quality slots from BetSoft on the
Picante Gaming casinos. BetSoft Gaming, Picante, and GGL all view this as a beneficial move for each of the companies that will benefit gamers of all types.

By expanding the offering and variety of games on the Picante casino websites, players will have more selections and visibility to games that they may not have considered prior to this partnership.
The result will be anticipated growth for each of the companies involved in the agreement.

This partnership is one of several BetSoft has entered into in recent months. Just this past summer, BetSoft announced a partnership with SBTech,
and also expanded into an additional nine online casinos. Their popular, unique slots can now additionally be enjoyed at these internet casinos:


BetSoft Gaming also provides a full complement of table games including Blackjack, Roulette, and others. Their library of offerings also includes Keno and other lottery-style games.
Many of these are available of the mobile platform, for both Android and iOS devices. Utilizing their own proprietary technology, the company is able to generate quality similar to that
generated by animated motion picture studios, with accompanying high-quality audio recordings. They also utilize compression technology that provides high-performance operation and
fast loading of game content, enhancing the player’s gaming experience.

You can anticipate that the new Pinocchio game will live up to the quality and enjoyment expected from BetSoft’s library of games.
Reactions: Ellis and Mike

Wow the Pinocchio looks so nice and has some great features! I am a huge fan of Betsoft Slots!
Thank you for the wonderful review!
Reactions: Marina