Raging Rhino is a WMS online video slot for wildlife fans. The game is capable of transporting players to the mysterious land of Africa, where they can enjoy the thrills of an African safari and meet
and interact with a wide range of wild creatures, especially the rhinoceros—all from the cozy comforts of home. Though based on the African wildlife theme, the slot emphasizes on the rhino.

This videoslot by Williams Interactive features 6 reels and 4,096 ways to win. The slot is special as it is the first Any Way online video slot to be launched by WMS.
The coin values range from €0.40 to €60.00 per spin of the reels. Since Raging Rhino is a high variance slot, it can make players very rich indeed, but they need to get really very lucky. 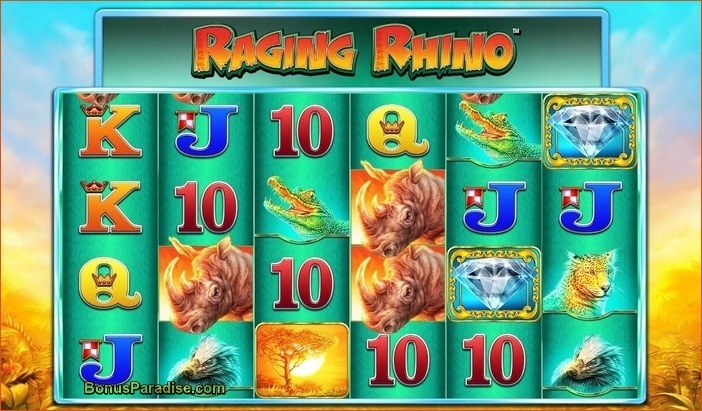 The reels of this slot are set in the backdrop of the Savannah, and the graphics and imagery are incredibly beautiful. The slot features realistic icons of Rhinos, Trees, Gorillas, Crocodiles,
and other wild creatures and presents an exciting and lucrative way to learn more about African wildlife.

The good news is that players can re-activate the free spins feature while playing a free game. If players land two Diamond icons during a free spin, they will be awarded 5 extra free games.
Those who have played Raging Rhino say that it is very easy to win extra free spins.

The Tree icon serves the function of the wild, giving players the opportunity to create winning combinations. The wild icon appears only on the second and sixth reels and is associated
with multiplier values of x2 and x3. However, players who land three or more Tree icons along with Rhino icons can win really huge multipliers. Players of Raging Rhino report to have
won multipliers of up to x25 and even more. Landing wild icons during a free spin translates into incredibly huge wins.

Williams Interactive has built Raging Rhino in such a way that players have to win.
No player will walk away from Raging Rhino disappointed as the slot is programmed to yield a win of x10 even if players win less than that amount.

Very nice slot from WMS! I always like to try my luck for a few spins.
Reactions: Marina and Mike