For a while now we’ve been seeing Rizk Online Casino pop up all over the forum with juicy stories such as when one player won just over €64 000, without making a deposit.
With eye-catching headlines such as that, we felt impelled to knuckle down, open an account and review the casino to show you what’s what and what’s going on. 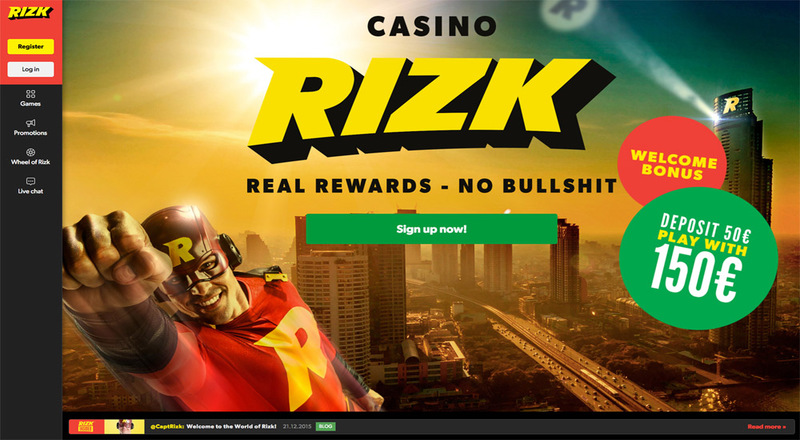 Now we’re going to take you on a special guided tour, accompanied by Captain Rizk and his faithful companion, Lucky the Superdog, through the Rizkverse to showcase the wonders within.

Starting off, we immediately noticed the Welcome Bonus which, after completing the quick 3 step sign up process, we were able to claim from our Rewards section
on the Rizk site. Once inside the Rewards section, which can be found in the menu tab, we were pleasantly surprised to find a complimentary spin on Rizk’s legendary device,
the Almighty Wheel of Rizk, just sitting there waiting.

The Wheel of Rizk is a device unique to Rizk and one that will reward you just for playing. It’s simple enough, to understand as well, when you play online casino games
at Rizk, you create Rizk Power which is then used to power the wheel. Once your Rizk Power Bar has bene filled, you will increase in level and be able to spin the Wheel of RIzk.

All the prizes won from the wheel are completely wager-free and can include such things as Free Spins, Real Money, “Big Ass Jackpots” and even Rizk Race points. 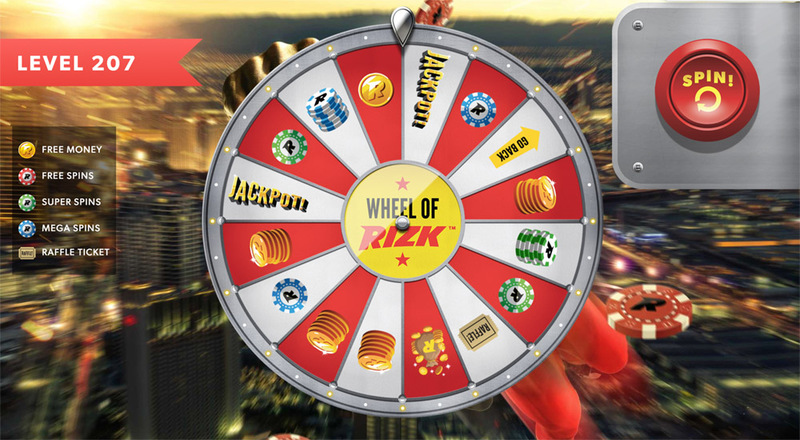 Once we were in the casino we paid a visit to the Rizk Insider which is the blog section of the casino and where you can get all the
information about various promotions they’re running, various winners and any new features they release such as the Withdrawal Lock.

One of the promotions that we found particularly pleasing was the Rizk Race which is their weekly competition that offers you the chance to win a share of the €7.777 prize pool. All you have
to do to win is to play casino games, when you level up you win race points, you can also win race points as a prize from the Wheel of Rizk and the player with the most accumulated points at
the end of the week will win the first prize of €777 as well as other cash prizes, free spins, casino cashback chips and a Double Speed Chip which will activate a Double Speed Power bar.

We know from past experiences that most casinos will set up a particular portfolio of online casino games and then just update it occasionally when a new game is released.

Rizk, on the other hand, is constantly improving their games list with new releases as well as adding old favourites and exciting games. So far they can boast an extensive compilation of online slots
from a variety of different providers, table games such as blackjack, roulette and baccarat. They also offer up Live Dealer games from two different software providers, NetEnt and Evolution Gaming
that work on mobile devices as well. Their pièce de résistance is their progressive jackpot slots including the ever popular Major Millions slot which also happened to be the slot game that produced
their first ever progressive jackpot winner when a player from Holland won €269,038.90

From the very beginning, we have heard about the fast payments offered up at Rizk but we thought that it was just hype. However, we are pleased to announce that they were not just tales.
Having spoken to the excellent support team via the live chat feature, we were informed that they strive to push through payments in the space of 3 hours.

They offer up a wide variety of payment options for you to use including Credit Cards, Web Wallets such as Skrill and Neteller as well as new payment providers such as Zimpler. An extremely
nice feature of theirs that we were incredibly impressed with was their Withdrawal Lock which was used to great effect when a player from Sweden won a €73 000 jackpot from a €12.50 bet.

The Withdrawal Lock will allow you to do exactly what it says, lock your withdrawals. This will ensure that you don’t bow to pressure and cancel the withdrawal to carry on playing.
It’ll mean you will get to spend every single cent of your winnings.

Rizk Casino opened on January 6th 2016 - one year ago!
Captain Rizk and the whole team are celebrating Rizk Casino's first Birthday and players are invited to the party!
Happy Birthday Rizk!