South Park is one of the best American television shows that has become a worldwide classic. Featured as an adult,
animated sitcom and humorous and sometimes satirical content, the popular series is an all time classic. A featured film was even made.
With the popularity of South Park, Net Entertainment has now made it available as an Online Video Slot that you can play for real money.

If you're a fan of South Park, you'll surely enjoy this video slot. All the characters are there along with some brilliant graphics and 4 different bonus rounds
which were created from some of the classic episodes featuring Kenny, Kyle, Cartman and Stan.
There are three different mini features that will happen randomly while playing and will help you increase your winnings. 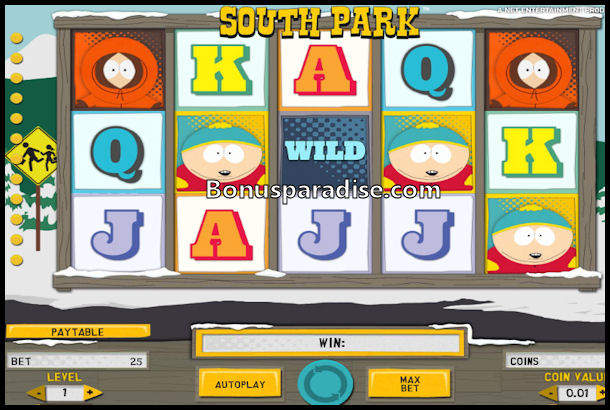 South Park is a 25 payline online video slot. It features an auto play and max bet option.
Players have the option to increase the level of their bet per spin. All wins pay left to right.

The Wild symbol can appear anywhere on the reels in the main game and substitutes for all symbols except the Bonus symbol.
It also appears in the Kyle Bonus round as Ike and is sticky in the Stan Bonus round.

The Kyle Bonus round earns you 10 free spins. There is a special Ike Wild symbol that will activate a mini bonus.
When Ike appears on reel 5, you can win an additional 3 free spins, win multipliers of 2x to 10x on that spin or a cash prize.

The Kenny Bonus round has you guiding Kenny through different zones. Guide him through the win zone with coin winnings,
the danger zone has traps and the multiplier zone where you can increase your winnings.
Stay away from the traps which causes accidents and you lose a life.

The Cartman Bonus round has eight bushes for you to pick from.You have one choice, but may pick a bush to try again.
You could chose coin wins, double up, reset, warning symbol or game over.Chose carefully.


The mini features in the game are great

Terrence and Phillip mini feature will randomly happen during regular game play.
Two figures will appear and hop onto reels 2, 3 or 4 making 3 landing spots Wild. This could really earn you some winnings.

Mr. Hankey mini feature will also be random during regular game play.
You could get 3 to 5 wild symbols. 3 Wild symbols will be placed on
reels 1, 3 and 5. Imagine getting 2 additional Wild symbols?

Cartman mini feature is also random during regular game play.
It is a 3x3 square of Wild symbols and it's called Beefcake Wild. Imagine having a block of nine wilds? Wow!

Nothing lacking in South Park video slot. Bonus rounds galore and the mini features sure make this a hit.

I absolutely love the new South park Slot! It has So many Bonus rounds!!!
Great review!
Reactions: 1 person

What a great slot game!! I like the mini features.
Imagine getting all those wild symbols?
Reactions: 1 person

I really love the South Park Slot.
He can pay very well with the BIG Wild in the middle.
Have fun everyone.