Every now and then an online video slot comes out and people are just drawn to it. Starburst™ is one of them. Over the years, this has become one of the most popular playing slots for players.
Players love the basics of this one. But also love a special feature that will have you seeing STARS! No, you didn't get knocked on the head to see stars. You're spinning your way to multiple stars
for some great winnings. At first glance, Starburst™ appears to be a very basic video slot from Net Entertainment. The graphics are vibrant and lure you into playing them. Even the sounds
have a feel of a land based Casino. I almost feel as if I'm sitting in front of the machine in reel life. If I close my eyes, I am there in person. Maybe that is the lure of this all time favorite, or is it
the chance of winning up to 50,000 coins?. No matter, it's really a very popular video slot to play. Players walk away winners with this one. 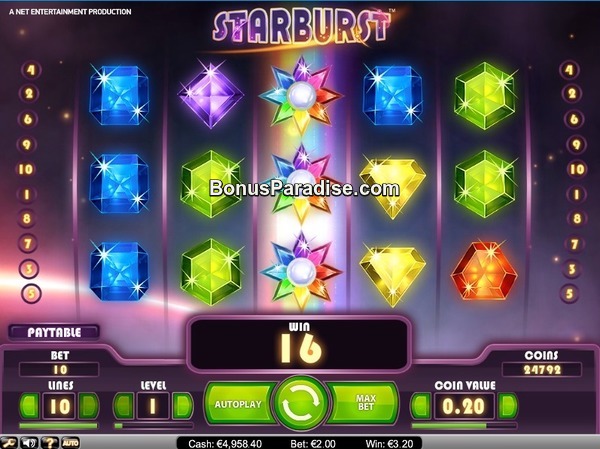 As always, NetEnt inspired slots are loaded with surprises and are easy to play. Their game interface is pretty straightforward. Players will feel the ease of playing this highly
popular slot machine. Looking at the slot game interface, you can choose the number of lines played with a simple click and the level of your bet along with your coin size per spin.
No confusion here as it is all up front.

Starburst™ has 10 paylines to win on. But don't let that discourage you. Players worldwide find it profitable. It's spread out amongst 5 reels and 3 rows.
This slot game can pay from left to right and right to left. Now that's basic slot play with a nice deviance with the Starburst Wild symbol.

The Starburst Wild symbol is a multiple of colors in a hexagon Star. It will only appear on reels 2, 3 or 4. If the Starburst Wild symbol appears in a winning combination,
you will have an extraterrestrial experience of a lifetime. The Star will burst to expand over the reels and will trigger a re-spin. The Starburst Star will stick in place and
could grant some astronomical winnings should it land in a winning paylines. The maximum number of re-spins is capped at 3. Imagine covering reels 2, 3 and 4 with the
Starburst Wild? You could end up with some serious cash.


Join many gamblers worldwide with this most popular video slot from NetEnt.
Starburst™ can be played at Vera&John Casino.
Last edited by a moderator: Aug 15, 2014
Reactions: Mike, Ellis, Ardilla and 1 other person