The Dark Knight Rises slot is one of the many movie franchise-based slot games from Microgaming, and just like many of its predecessors it is a five-reel, 243-payline fare. But this Batman-themed slot
isn’t any ordinary slot machine, as is the case with many of Microgaming’s quality slots. Not only is it the first slot game for the Samsung Galaxy Gear 2 (or any wearable for that matter), it is Bane-sized fun!

The look of the game feels like you’re staring right into The Caped Crusader’s Batcomputer, analyzing the main players in Gotham. In addition to the sleek look and memorable characters, with bigger wins
it plays a montage of scenes from the movie. This adds quite a bit of fun to the game. The game’s excitement is taken up a notch with the music that sounds like it came right from Hans Zimmer’s movie score. 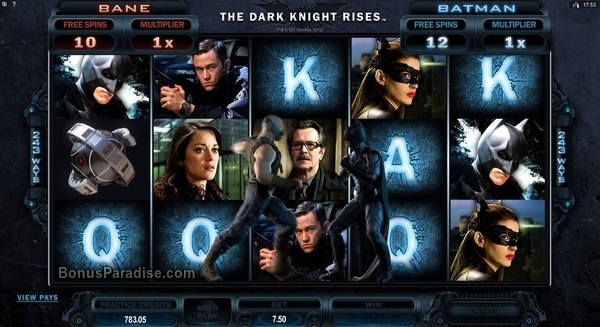 The reels feature the obvious J, Q, and K, but also features John Blake (or Robin), Commissioner Gordon, Bane, Talia al Ghul, Selena Kyle (or Catwoman), and obviously The Bat himself. It also features one
scatter symbol (the bomb) and one wild (The Dark Knight Rises logo). The wild is able to stand in for any symbol but the bomb.

But the look and sound of the game aren’t the only great things about it. There are tons of ways to win a few bucks, although there is no progressive jackpot. One of the best ways to win some big money is
through getting three scatters on the board; this gives you ten free spins. During the free spin round, you can either choose The Dark Knight or his nemesis, Bane. When you pick Batman you get extra wilds
packing some of the reels while the wild symbol can max out your win with a potential six-of-a-kind win, which is double your measly five-of-a-kind payout. If you choose the man who broke The Bat then
you increase your potential for wilds. What’s more, when you get a winning combination Bane shoots out the symbols, allowing other symbols to drop in their place, allowing you the potential to win several
times in one spin.

The other modes feature even more ways to win. During your free spins you might get to see an epic battle between Bane and The Bat. With every blow landed you’ll get free spins and multipliers,
increasing your wins. Another random occurrence has the symbols on the reels re-arrange to give you the maximum possible payout for that spin.

Overall, it’s an incredibly exciting game that can pay out big. Any Bat-fan, or fan of winning a good game of slots, should check this game out!

Another trilogy-based slot is the Iron Man 3 slot by Playtech. This game is a five-reel, 25-payline affair. The game is graphically impressive but contains only a few symbols to play with, those being the Mark 42,
War Machine, Iron Patriot, the Iron Man logo, Tony’s arc reactor, an Extremis soldier, the Mandarin, and the basic 9, 10, J, Q, and K. The game does have some music, but it’s somewhat repetitive and quiet.

The arc reactor acts as a basic wild and the Iron Man logo is the scatter. The wilds seem surprisingly regular, which is nice, while the Iron Man scatter symbol shows up somewhat rarely. 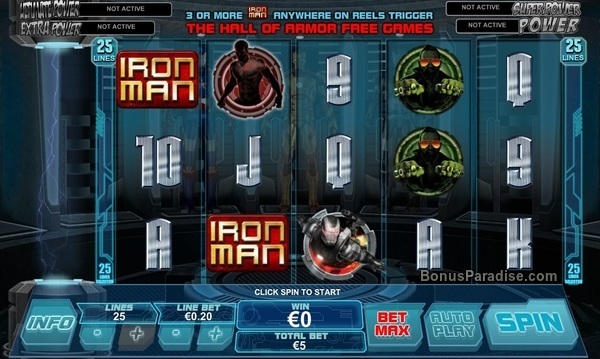 The bonus features that the game does have are very few and far between, partially because of the requirements to get them. One of the features is the All Systems Go Re-Spin mode which is activated with the
Mark 42 on reel one, War Machine on reel three, and Iron Patriot on reel 5. Again, it’s a very specific requirement for the game mode. During this mode the suits are all locked and become scatters, making a
huge amount of scatter possibilities, which can mean some significant wins.

The Hall of Armor mode gets activated by having three or more Iron Man scatters show up at one time. In this mode, you get to pick exactly how you want to play. The Mark 42 seems like the best choice because
it gives you ten free spins and freezing wilds. The wilds only freeze for three spins, but, as I mentioned before, the wilds seem to show up with some frequency. Choosing War Machine awards you with eight free
spins and random wilds, which can potentially add a significant amount of wilds to the board. The Iron Patriot, in my opinion, has the worst bonus, giving you fifteen spins and a dynamic multiplier.
Frankly, I would rather win a lot more often than maybe get lucky with the multiplier and get lucky with the spin.

As far as money goes, the game goes long lengths of time without producing wins, giving the house a significant edge.
The big advantage that the Marvel games have over other games, though, is the progressive Marvel jackpot that has the potential to pay out huge amounts of money.

Overall, the game is a fair game but doesn’t have the pizzazz of some of the other movie-themed slots with movie clips and frequent big wins.
Reactions: Ellis and Mike