Playtech's slot The Mummy which is based on Universal Studios 1999 hit is pleasing.

It will leave you speechless with amazing graphics, real clips from the motion picture and an abundance of bonus features.
This is one adventure that is sure to please all of the slot lovers who play it. With so many features, who could stop playing? 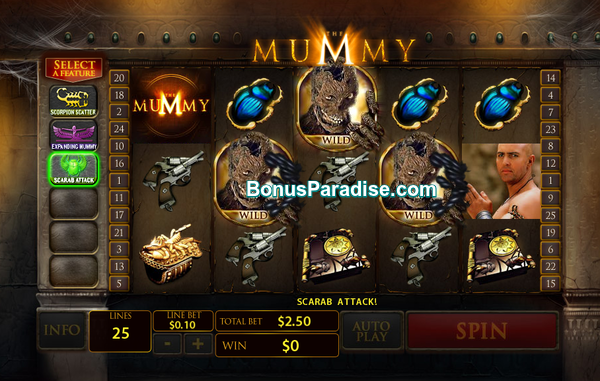 With 5 reels, this 25 pay-line slot will keep you spinning as you watch clips from the original movie.
What could be better then taking in a movie while gaining cash.
Winning comes easy with The Lost City Adventure Bonus, the more you play the more features you will have to help earn those big pay-outs.


The Lost City bonus opens randomly as you play the game.
When it is triggered you are taken to a bonus area where you will have 6 crates to choose from.
Choosing carefully is the key as you hope to collect 5 prizes before seeing COLLECT from the crates.
Not to worry though, when you do see COLLECT you are still awarded a bonus feature which help increase your bankroll.


There are 8 Bonus Features in total. 6 of these features are listed down the left hand of the slot machine.
Every time you unlock one, it is illuminated on the side for you to pick your favorite. Even though there are 6 features,
you must only choose one to help guide you to the wins. The other two features become a permanent part of the game once you have unlocked them.
Play The Mummy at Omni Casino

The first bonus feature you will unlock will be SCORPION SCATTER. This feature will change all pictures of the SCORPION into Scatter symbols.
Get 5 of these and get 100X your bet. This is one feature that is sure to make you keep spinning for more.

The second Bonus Feature along the journey is EXPANDING MUMMY. This is where any of the WILD Mummy symbols can
now expand to make the entire wheel WILD. Having Mummies chase you here is one nightmare you won't want to wake up from.


The third feature that comes along is the SCARAB ATTACK. When you see a WILD symbol appear on the third reel,
it will cause two more WILDS to appear, one on the second reel and one on the fourth reel. One attack you will want to take lying down.

Now the next time you see the crates, FREE GAMES feature will be added to the game permanently. Free games will be granted when you see
3 of the FREE SPINS symbols. You will be given 5 regular spins and 1 SUPER SPIN. During the regular spins any wilds that are shown will be recorded.
When it comes time for the SUPER SPIN, all recorded WILDs will be added to the reels. What a way to bring home those Egyptian treasures. 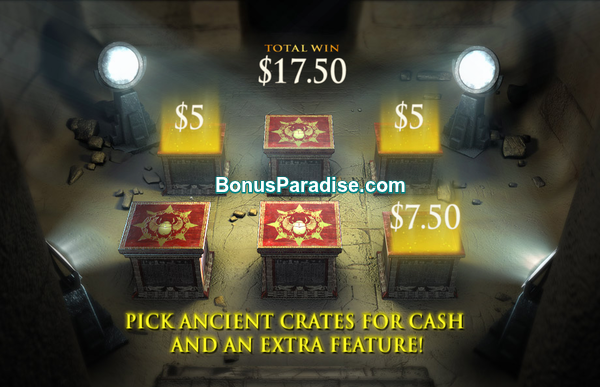 So the crates keep appearing and now you are given COLLAPSING REELS.
This will allow all winning pay-lines to burst and new symbols will fall into their place giving you endless winning possibilities.

The fourth feature to be placed on the wall is MUMMY POWER. Here for every WILD that appears up to 3, your wins are multiplied by 3, 6, or 9.
If you have one wild it would be 3x, two wilds, 6x and 3 WILDS 9x. Huge wins are sure to be brought in with this feature.

Next it's the final permanent feature, MUMMY HUNT. Keep your eyes peeled for the MUMMY HUNT logo on reels 1 and 5,
as when you see this you will be whisked away to dark tunnels where battle and kill the Mummies you cross.
Kill all 10 Mummies by choosing left or right lead only by the dim light of your torch. Escape with your life and treasures through the light at the end of the tunnel.

Last, not least the final feature you can unlock is the MUMMY RESPIN. Again look for the WILDs as this will ensure you win.
The re-spin feature will begin when there is a WILD on the board and you are awarded a re-spin. This will occur until there is a second win.

So many features, but the action doesn't stop there. The real win of the game is if you can manage to conquer the reels with 5 X Rick O’Connell (better known as Brendan Fraser)
this will give you a HUGE win of 10000X bet. Wouldn't that just be wonderful?

So head over to Omni Casino today and join the adventure now.
Reactions: Kotsy, Ellis, Mike and 1 other person

This one of the best Online Slot from Playtech imo.
Great Graphics and many bonus features. The Mummy is a really entertaining slot.

OMG I must try out this Slot!!!!!
Thank you for the incredible review Deemac!!
Reactions: deemac80