The Stories Behind Scientific Games Corporation

Near the end of 2014, Scientific Games made headlines for purchasing Bally Technologies. Unless you follow the casino industry carefully, you might not be aware the Scientific Games is heavily involved in gambling and has picked up several companies already. While there’s no clear indication what’s prompting these buys, the company is surely growing in leaps and bounds. Interestingly, each new company they pick up retains its identity and continues its own projects as well.

Established in 1973, the New York company was the first one to print secure instant-win lottery tickets, which are mostly referred to as scratch cards today. They worked on perfecting the process from 1974 until 1982 when they were purchased by Bally Manufacturing.

This ownership would continue until the senior managers banded together and purchased it back in 1991. In the meantime, they continued working on lottery-related products, which included the first touch-screen self-service lottery kiosk back in 1986. In 2001, the company was purchased by Autotote Corporation, who then changed its name to Scientific Games.

In 2003, they picked up MDI, a company that specialized in lottery, as well as internet-based services. Over the next several years, they bought Games Media,
which specialized in pub gaming machines, followed by The Global Draw, which worked extensively on server-based gaming terminals in the UK, and after a few more acquisitions, they settled on WMS and Bally. Despite the diversity their acquisitions brought, Scientific Games as a parent company, continues to focus heavily on lottery games. 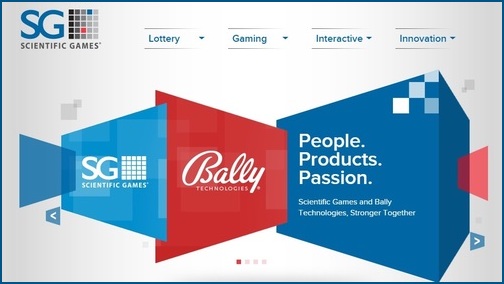 In 2001, MDI got its start creating online lottery options in New Jersey. They took the United States by storm and rapidly expanded into Indiana, Kentucky, Virginia, California, and more. By the time that 2007 hit, they were responsible for more than 100 lottery websites. Just 3 years later, their portfolio had grown to over 300 websites. Today, MDI Interactive specializes in creating loyalty programs, players clubs, and rewards programs, in addition to their lottery work. Their parent, MDI Entertainment, seems to focus more on purchasing exclusive rights to popular brands for the purpose if integrating
them into games. The list is huge and has well-known names like Boggle, Scrabble, Monopoly, Pac Man, Major League Baseball, and Zynga Bingo.

The parent company of Williams Interactive and WMS Gaming is WMS Industries, which was purchased by Scientific Games in 2013. All of the Williams companies are the result of a Chicago business launched in 1945 called the Williams Manufacturing Company. The founder, Harry E. Williams specialized in pinball games, though the company was divided, merged, split and more over the years. Today, Williams Interactive is responsible for numerous online casino games. WMS Gaming, on the other hand, works on land-based casino games.

Like WMS, Bally was originally a pinball game manufacturing company. It was established in Nevada in 1932 under the name Bally Manufacturing. There was a natural transition into slots and casinos, but the company also delved into fitness clubs and theme parks. Also like WMS, Bally changed hands repeatedly and was divided and merged to the point where it no longer resembled the original company.

Despite the fact that many entities, including the fitness clubs, still use the Bally name and logo, the various companies are no longer related. As it operates today, Bally Technology has a hand in just about every aspect of the casino industry. They have a line of games developed for land-based casinos, plus some other highly innovative casino products, like electronic tables. In addition, they have branched out into egaming. First, they have a selection of proprietary titles, which are available to play on a desktop PC or on mobile devices. Secondly, they have developed casino platforms for operators of desktop casinos,
as well as a mobile online casino platform. The company is so large, that when they joined forces with Scientific Games, the deal reportedly cost 5.1 billion dollars.

Reports indicate that Scientific Games approached Bally about the buyout. Both companies were excited about the possibilities and expect to bring in 3 billion dollars of combined annual revenue. Obviously, a major part of Scientific Games’ business strategy involves buying companies and then letting them continue to exist in their own rights. However, it begs the question, “To what end?”

As of now Scientific Games, when combined with all its subsidiaries, has a monster share of North America’s casino slot industry. Moreover, they are one of the largest gambling-related companies in all of America and they have arms that reach into every aspect of the business. While the extent of their reach may not be of interest to most casual gamblers, it will, at the very least, lead to a variety of high-quality, licensed casino games being released over time.
Reactions: Ellis and Mike