​
It’s the month that we’ve been waiting impatiently, the month of Halloween. We’re carving pumpkins, choosing the spookiest costumes and preparing the candies. And developers never leave us without a slot treat that will celebrate the spooky season. This time, NetEnt has decided to reveal its halloween-themed slot The Wolf’s Bane just in time. 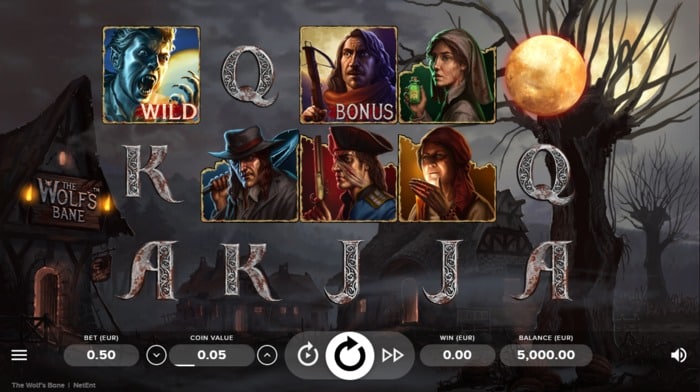 Made up of parts that have been tested and successfully received by players for years, The Wolf’s Bane is based on the industry-standard proven 10-payline 5-reel format, with several interesting special features on offer.

The Blood Red Full Moon and the Howling Wolf

You’re taken to a ravaged village from the 18th century, where the red blood moon aluminates the reels. The eerie atmosphere is enhanced by the haunted reels, filled with creepy nurses, gravediggers, ghastly clairvoyants and nightmarish soldiers. Plagued by werewolves, the medieval village has an uncanny feel to it, and the terrifying soundtrack in the background with the chilling howls only add to it.

The blood-stained playing card royals are the lowest-paying symbols. But the scariest is the Wild, presented with a symbol of a man going through the shape-shifting process of therianthropy and slowly becoming a wolf under the influence of the big red moon. The regular Scatter is the Full Moon symbol, while the man holding a crossbow is the Scattered Bonus symbol.

On that note, when you see the Bonus symbol appearing on the 1st, 3rd and 5th reel, you should know that you’ve triggered the Pick and Click feature. This is when the game gives you the chance to choose from one of the three Bonus symbols, which will show you a prize from 5x to 50x.

With 3 to 5 Full Moon symbols, the werewolves are summoned and the Free Spins are triggered. You may get 10, 20 or 30 F ree Spins,depending on the number of Scatters you landed on the triggering spin. This is when the Wild Board screen appears. 4 different Wilds will be displayed on it: 2x Multiplier, Regular, Spreading and Expanding Wilds.

While you’re waiting to hit the “Stop” button, a selector will move between the Wild symbols at random. As you hit the button, it will stop and highlight one of the four Wilds which will serve as the Wild for the duration of the Free Spins.

The 2x Multiplier Wild multiplies your wins by 2x during the Free Spins, while the Regular Wilds will do their usual role of substituting for symbols bar the Scatter. The Spreading Wild transforms 1 diagonal or adjacent symbol into an additional Wild symbol, and the Expanding Wild expands to cover an entire reel.

During the Free Spins, you will see an additional Overlay Wild appearing on reels 1, 2 or 3 at random on each spin, playing the same role as the active type of Wild chosen by the selector. You can retrigger the Free Spins the same way you’ve triggered them, with no limits!

The Scatters are counted before the Wilds and Overlay Wilds are activated, and should you have the necessary number, they will be retriggered. These new Free Spins are automatically added to the total, and you continue playing the Free Spins for as long as you keep on landing Scatters.

NetEnt’s Announcement for the Slot

NetEnt’s Director of Games Bryan Upton said that The Wolf’s Bane was a beautifully-designed slot that would make players’ hair stand on end. Its release has been purposefully timed to coincide with Halloween, although, as Upton said, the game was still one with a classic horror theme that they all expected would have great longevity and would appeal to a huge audience due to its proven game mechanics.

The slot is a low to medium volatile one with an RTP of 96.74%, so appealing to a wide audience is what will probably happen. Considering Halloween is just around the corner, the game has probably already gone viral, and considering its design and quality, and the fact that it is playable for bets that range from 0.10 to 100 credits, with a max payout potential of 500x the stake, The Wolf’s Bane will most probably become a great hit for the developer, and will be played by fans no matter the time of year.
You must log in or register to reply here.
Share:
Facebook Twitter Reddit Pinterest WhatsApp Share