Soon you will be able to play the long awaited Video Slot Thunderstruck II! Thunderstruck-II will be released on May-4-2010!

Royal Vegas Casino (Fortune Lounge Casino Group) and BonusParadise.com have teamed up to bring you already a game review and some awesome Thunderstruck II screenshots !

Thunderstruck II is a 5 reel, 243 Ways, video slot, with a wild and scatters which trigger Free Spins Selection Bonus.
The game also includes a randomly triggered WildStorm Feature with Held Wild reels, as well as the introduction of a Player Achievements structure.

As a sequel to the 2003 Release of one of Microgaming’s most famous slot, Thunderstruck II remains true to the theme of the original game.
Players can enjoy a well known brand with high quality enhanced graphics, epic sounds and a hall of extraordinary features, larger than life characters and innovative game play.

This 5 reel Video Slot is based on the popular Norse God of Thunder - Thor and is a continuation of his journey along with other ancient Norse Gods depicted with all their glory in the realm of Asgard.

Thunderstruck II has no payline constraints and instead offers up to 243 ways to win. Symbols need to simply be aligned left to right anywhere on the reels to win. There are Up to 243 winning combinations allowing the player to create more rewarding opportunities

The game features a multitude of bonuses, from a thunderous WildStorm feature triggered randomly in the game accompanied by Thor’s magnificent presence, and up to 5 Wild reels.

3 or more of Thor’s hammer (Mjollnir) landing anywhere on the reels, awards Entry into the Great Hall of Spins.
Each entry to this great Hall brings the player closer to unlocking the chamber of the other Gods, who wield greater features and rewards. 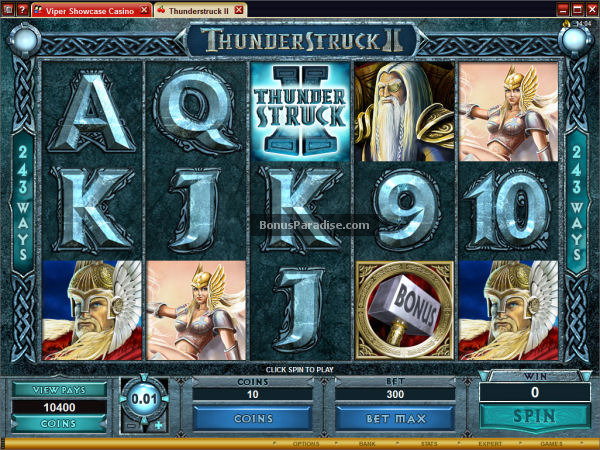 Valkyrie – Maiden of Valhalla is the 1st to be unlocked and offers grand multiplier of 5x during her generous 10 retrigger-able Free Spins.

Loki – The God of Mischief, is unlocked on the 5th trigger and offers 15 Free Spins, with a mesmerizing Wild Magic symbol which will throw out tendrils of light, transforming random symbols into additional Wilds.

Odin – The Ruler of Asgard, awards 20 Free Spins on the 10th trigger of the Bonus. During his feature, Odin sends out his ravens Huginn (thought) and Muninn (memory), to fly into random symbols turning them to 2x and 3x Wild Multipliers.

Thor – The God of Thunder makes his presence available on the 15th Entrance in to the Great Hall of Spins.
This thunderous God grants 25 Free Spins accompanied with a tremendous Rolling Reels Feature at up to a 5x multiplier.


Further game features are provided in the system of Achievements. Players can win Symbol Achievements by winning the range of payouts of each symbol.
This is reflected in your Paytable. As you unlock each symbol your paytable will begin to turn gold. This allows you to keep track of your winnings and aim for an entire Gold Paytable.
Reactions: 2 people

in Cali with the most WONDERFUL Husband in the GAL

WOW Boss this slot looks awesome...
wish the USA would get their ducks in a row so we could all play.
Thank you for the great review:kiss:
Reactions: 2 people

Yeah It looks really SUPER Marina! Oh boy I cant wait until that
Slot is there! It really seam to be Microgamings Best Creation
Last edited by a moderator: Jun 24, 2014

I would love to know, if there are members that played already.
I just received some free spins and Im absolute amazed by the fantastic
Graphics!
Last edited by a moderator: Jun 24, 2014
Reactions: 1 person

Nova Scotia (in the woods)

Well I played a free chip for 10 spins and also deposited 40 bucks at two different sites. To be honest I'm not impressed and kinda feel let down by this slot. It 30 cents a spin and 243 ways to "win" so you can't adjust lines. I had a few 2.00 hits but nothing to write home about. I never triggered any bonus rounds so for me it was boring. My money went way faster than normal play at my fav games at micro. Both casino sites I just spun and watched my balance go south and it took like 10 minutes so really felt ripped off.. Alot of other fixed 243 ways to win slots seem to give better play and especially at fixed 30 cent spins. The graphics are good and the bonus rounds are probably really good but how many spins does it take to trigger?. I doubt if this slot will be anywhere near a fav for me. If I play micro i guess we stick to other slots and might give this slot a few spins if i'm up some money. I was really looking forward to this slot but this time it didn't float my boat.
Reactions: 4 people

I agree with you Mick, I´m not impressed. I hit some bonus rounds but never reached the second level. The bonus rounds did not pay good. The random feature I never saw.
To be honest, after that Tomb Raider 2 flop, I was not optimistic about what Thunderstruck 2 will have to offer and so far I feel I was right.
Reactions: Melissa12, Mick114, Ellis and 1 other person

They did a super job on the graphics, theme and ideas for features.

But I am also not very impressed about the payouts.
I did try Thunderstruck 2 in practice play and for real money.
In practice I came to the last feature in the Great Hall of Spins, it is the rolling reels, Tomb Raider Secret of the Sword has this free spin feature too, well it does pay really really bad.

I will not play it anymore, I will stick with the old slots and with my video poker at Microgaming Casinos!
Reactions: 3 people

Yeah guys I had the same, I received some free spins and won 6 of it. After that I
continued the play on Thunderstruck II. Hit some bonus rounds but no higher prizes
then 3 or 4. I think this slot can hit like Crazy, but its not my favorite slot.
The look, graphics and sounds are awesome!
Last edited by a moderator: Jun 24, 2014
Reactions: 3 people

I guess the casinos request lower paying slots now because of their financial situation. All the good paying slots are older ones..maybe with one exception: Deck the Halls
Reactions: 2 people
P

I have to say I'M very impressed with this new game

First of all
they put lots of free spin features in this game , yes you have to unlock them
but what fun would it be , if you did not have something to look forward too.

Second of all
Payouts are the same for most slots games

you can have a good run on the game some times , and some times no luck

All slots are that way

The Game has lots of great things going for it.

I saw a few small jackpots on this games all ready

I would take a very long time to unlock the pay table to Gold , but something to lock forward too

hyesss: I think this game is great