It seems like quite a few table games that have popped up in recent years are simply variations of another game (particularly that mainstay favorite: poker).
While those are popular for an extremely good reason, sometimes it’s interesting to see what other table games there are to spice up your life and expand your horizons a little bit. 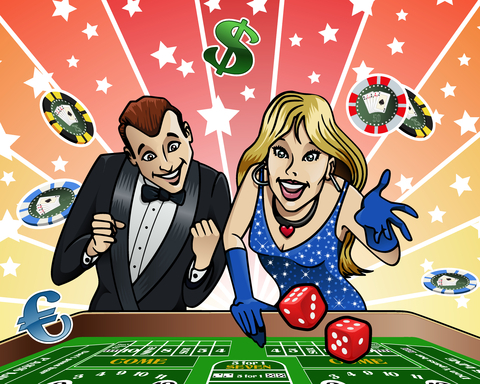 Fan-Tan isn’t a particularly popular game stateside and has recently had waning popularity in its home country of China. Although it is somewhat a game of chance, there is a strange twist
to it that makes it unique from something like the Wheel of Fortune or a standard dice game.

In Fan-Tan (which literally means “repeated divisions,” you’ll see why) the banker places an unknown amount of beans, beads, coins, or other small objects into a bowl out of the view of the players.
In the center of the table there is a square drawn or placed with each side labeled one through four. Each player places bets on one of the numbers. The banker than pours the items out and pushes
them away from the main pile four at a time, leaving either four, three, two, or one at the end.

Part of the appeal of this game is the suspense. The banker methodically taking away items four at a time makes for a much more appealing conclusion that just a spin of the wheel.

Pai Gow is another Chinese game but instead of beads or cards, this one is played with Chinese dominos. Though the numbering system is the same on a standard set of American dominos, the Chinese
dominos are doubled, having two double sixes, two double fives, two six and ones, two four and fives, etc. At first glance, the rules seem simple enough. You get four tiles to make two hands with. The lower
value hand is the front hand, the higher value hand is the rear hand. The hands are scored by counting the amount of pips on the dominos in the hand and dropping the tens. If the player’s hands both beat
the dealer’s hands then the player wins. If it’s one and one, it’s a push. If the player is beat on both hands, the dealer wins. That’s pretty simple.

But when you throw in Day and Teen tiles, Gongs and Wongs, Gee Goons, and the various rules for pairs, it suddenly becomes one of the more complex common table games in a standard casino. Some
of the special rules even require ties to be broken by the aesthetics of the dominos themselves, the determining factor between the two a player simply has to memorize since each set of dominos is different.

On the other end of the complexity spectrum is the classic kids’ game War. The rules are the simplest since playing peek-a-boo with an infant. The two players split the deck in half and then draw from the
top of their deck. The highest value wins and takes the cards. In the event of a tie, the game gets as complex as it’s going to get: each player places three cards face down and a fourth face up. The winner of
that round takes all eight cards. The last person with cards wins.

The game is particularly unique because it is the only children’s game that has made it into the casino world. Honestly, there are very few variations from the children’s game other than adding more decks
and playing for money. If you want a game that’s quicker than slots, war is for you. Maybe next casinos will start featuring Go Fish.

Faro (pronounced like “pharaoh”) was originally a French game but made its way to America sometime in the 19th century. Because of how it’s played people found that it was a quick way to make cash
because it has the best odds for the player to win. This made it extremely popular throughout Old West bars and was even played frequently by soldiers during the Civil War.

The unfortunate thing about Faro is that it’s an incredibly easy game to cheat at which led to some interesting measures that prevented cheating, such as driving a nail through the deck, fastening them
to the table but wasting a huge amount of cards in the process. The game is simple to play and can be played by basically any amount of people at one time, adding to its popularity.

Basically, the deck is shuffled and players bet on the third card being drawn. The first card drawn by the dealer remained face down and was “burned,” the second was a losing card for the player and anyone
who bet on that lost their money, the third card (which pays a one-to-one payout) was the winning card for the player. Anyone who bet on anything else pushed with the dealer. The only real advantage the
dealer had was during the final round where the player was tasked with guessing the order of the final three cards (but winning resulted in a four-to-one payout). The ease of play and player advantage caused
most casinos to do away with the game by the seventies with one of the last, if not the last, Faro table in Nevada being closed down by the mid-80s.

Let It Ride is the only poker variant on this list. Most of the rules aren’t spectacularly different from other variations of poker: players are dealt three cards each and must make a hand with those and the
two community cards. The thing that makes it fairly unique is something that can be called an anti-bet. Initially, the player bets an amount of money that can be divided by three. The reason for this is because,
after the three-card hands are dealt to the players, the players can choose to withdraw a third of their bets. This anti-bet can occur again after the first community card is revealed, allowing the player to cut
their bet to a third of their initial wager.


So, if you get a little burnt out of the standard variations of poker and need a quick change of pace, track down some of these interesting table games. Whether you need a quick fix, incredibly simple games,
or bafflingly complex games, you’ll find that your time away from the poker or blackjack tables can be just as rewarding.
Reactions: Mike and Ellis