There are less than four weeks until December, the month that many of us could do with the extra cash to buy gifts or celebrate Christmas in style.
Vera&John Casino is offering you the chance to get your hands on fantastic cash prizes throughout the month of November through a special Dream Weeks promotion.

Dream Weeks is not a new promotion to the site, and has been enjoyed by many players in the past.
As such, it has been brought back by popular demand and comes with a huge 25,000 prize pool this time around. 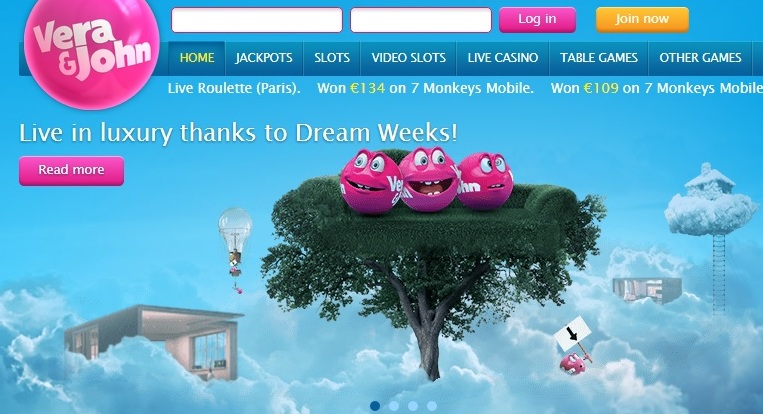 The promotion consists of four one-week segments, with a lucky draw taking place at the end of each segment and a weekly prize of €5,000.
In addition, the last week will also include an extra €5,000 prize just in time for the holiday season.

Vera&John Casino have divided the segments based on the things its players dream about and where they would spend their cash if they won.

The first week, which ends on November 9th, has been named the Dream Home, and encourages players to spend their €5,000 prize money on making their houses a home.
Deposit and wager €10 to earn a ticket into the cash prize draw, and the winner will be announced on November 10th 2016, following the draw.

Dream Shopping is the name of week 2 of the promotion which will run from November 10th to 16th 2016.
“If you dream of brand new wardrobes and trolleys full of top gadgets, we’ve got a €5,000 cash prize that can make it happen,” says the online casino.
Once more, players need to wager EUR 10 and earn tickets into the draw that will be held on November 17th 2016.

The Dream Holiday week kicks off on November 17th 2016 and will run until November 23rd 2016.
“You’ve got the travel bug, but it’s OK because we are here to make all your holiday dreams come true with an amazing €5,000 cash prize!” encourages Vera&John Casino.
Check back on November 24th 2016 to see if your name has been drawn.

The final week of the Dream Weeks promotion is the most exciting by far and has been aptly named Dream Christmas.
First of all, the online casino has doubled the weekly prize and upped it to €10,000.
One €5,000 prize will be awarded to the player whose name is drawn in the December 1st draw.
Once again, players can earn tickets into this draw by depositing and wagering €10 on any of the games at the site during the promo period.

Vera&John Casino will also reward the player who collects the most tickets during the promotion week with the other €5,000 prize.
There is no limit to the amount of tickets that can be earned in week 4.