What’s the Story with Casino Heroes?

Imagine that you’ve just signed up for an online casino and you head over to the slot games. Excited to play the latest NetEnt or BetSoft game, you look hurriedly through
the list until you find one. Only, it’s locked. You’re not allowed to play it. Ordinarily, this might be enough to send some people packing, but not someone playing at Casino Heroes.
The website has perfected the art of gamification for… games, for lack of better phrasing. 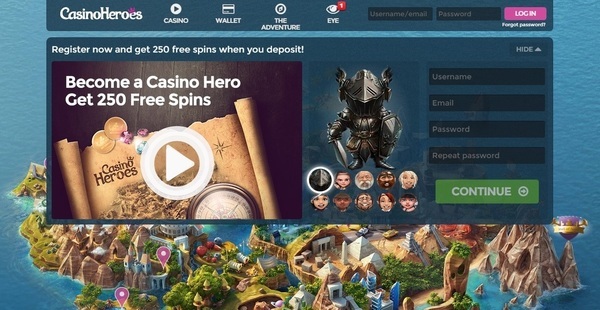 The term “gamification” is used when someone applies the elements of a game to make something that might be monotonous, more fun and engaging. You’ll see this on websites like Yahoo Answers,
where people earn rank for providing quality responses. It’s also a big part of Amazon, as reviewers can earn badges and each review they do can be rated by others. The same concept can be employed
when you’re trying to get your kids to help clean and you have them “shoot baskets” with their dirty clothes. A few online casinos have rolled out this concept to varying degrees.

Royal Panda’s loyalty program is one of the better examples. At that casino, you earn Panda Points for playing games, which you can then cash in for prizes. The Atari Casino does something similar as well,
because they force you to advance through levels to unlock games. Casino Heroes, however, takes gamification of games to a whole new level.

If you visit the site, the first thing you will see is a giant map in the background. You’ll also see the faces of 10 avatars. These are the “heroes” and if you sign up for an account, you will become the hero
of your choice. You’ll also gain access to a storyline that explains the background of Casino Heroes. The gist of it is that the island, aptly named Saga Island, mysteriously appeared and its residents are
preparing for their own version of Olympic games. Saga Island is broken up into 40 regions, each with its own gaming specialty. At some point, the “reluctant king” of Sagaville, has his crown stolen
by a dragon named Betser. Your goal is to beat the 38 bosses he leaves behind and get the crown back. How do you do it? By playing casino games, of course.

Aside from the fact that your goal is to navigate through the games and find Betser and the crown, CasinoHeroes has a few other things going for it. First, you’ll come across locked games. These are the
ones protected by the bosses whom Betser has placed. You have to play games to build up experience points to be able to fight the boss, and those will increase more quickly if you place higher wagers.
When you defeat the boss, the individual game is unlocked and you’ll get to play a “Saga Edition” of it, which supposedly pays out more than the same game would at another casino. In addition, you win
treasures (aka loyalty rewards) every time you beat a boss. Your progress throughout the master game is tracked on your own personal timeline. You will also have the ability to track other players and to
post badges and other things to social media as you advance through the levels. Although most online casinos have some kind of leaderboard, Casino Heroes has one that shows recent wins, plus the latest
advancements of other heroes. The company also believes in transparency, so they actually post each game’s active RTP and allow you to choose which one you want to play based on that.

The Real History of Casino Heroes

Again, they’re transparent, despite the amusing antics on the site. So, if you look around a bit, you’ll find a timeline of the company’s history, too. The site was launched by Georg Westin, who has over
a decade of experience in the online casino industry. He worked with companies like Betsafe and Betsson before founding CasinoHeroes. The core group of people operating the site is very small and the
company based itself out of Malta, despite its Scandinavian roots. In interviews, Mr. Westin has explained that his inspiration for the casino came from the gamification techniques used in social games,
like Candy Crush. Once he formed the idea, he spent about a year designing the platform, or the master game, so that it would be unique and deliver a total gaming experience.

Most of us play online slots purely for entertainment anyway, and that’s enough amusement for us. However, there’s something to be said for the total package that Georg Westin brought to the table
with Casino Heroes. Although the site is still new, it has established a fairly solid reputation so far. It will be interesting to follow how the story progresses for the hero and for Casino Heroes.
Reactions: Ellis, Kotsy and Mike

Interesting concept. For those that like a challenge, then this is the place.
Reactions: Mike

Great review! Love to read some backgorund information form Online Casinos.
Seams like a great place and I like different
Reactions: Mike

Casino Saga changed name to Casino Heroes.
We have updated this review with their new name.
Reactions: Ellis
V

Wasn't there a small contest refering to the new name, where players could win some Freespins?!
Reactions: Ellis

VaennyTi said:
wasn't There a small contest reffering to the New name, where players could win some freespins?!....
Click to expand...

I don't know dear, did not hear something about such a contest.
S

So they recently changed their name, from Casino Saga to Casino Heroes. The casino's website design is thrilling and the games give you a feel somewhat similar to role playing games. However, this is merely challenging for players, if you want to play a game you like then work hard for it, only then can you unlock it.
D