Which Animal Matches Your Gambling Personality?

Scientists are continually studying the behaviors of animals and comparing them to traits found in humans. Because there’s been a lot of recent interest in why people gamble,many of them now examine how various creatures handle risk and reward systems. Just for fun, a few study findings are included below so you can see which animal you’re like.

It’s been hypothesized that the majority animals benefit most from not taking risks. For instance, those that look for food in the same area time and time again, have a better chance of survival than those that go off in search of potentially higher, but possibly nonexistent, bounties. Therefore, natural selection should have reduced the overall number of animals that are inborn risk takers.

However, recent studies indicate this isn’t so with most animals, including pigeons. Scientists at the University of Kentucky created a slot machine of sorts, in which the birds could choose one of two buttons. Each gave them a shot at winning food pellets, rather than coins. The first button paid out just 20-percent of the time, but gave a massive jackpot of 10 pellets when it did. The second button paid out every time, but only delivered three pellets. Based on averages, the sure-bet yielded greater rewards, yet the pigeons preferred the thrill of the jackpot machine instead. So, if you’re drawn to the high-risk and high-payout games, you’re an impulsive pigeon.

A group of rhesus monkeys were treated to a few rounds of a simplified primate video poker game. Actually, they played more than a few rounds, because they loved gambling so much. Participants could choose from one of two “stacks of cards,” in hopes of receiving a payout of juice or water. In one set of trials, one side would always be a winner, while in a second set of trials, the winning card alternated between sides. In either case, the monkeys caught on and began to consistently win. Once this happened, the scientists would randomize the winning deck, leaving the participant with no existing pattern
to follow. Rather than adjusting their strategy, the monkeys continued using the technique that worked for them previously, in hopes their regular payouts would return. If you believe in hot-hands, winning streaks, or are a creature of habit, you’re a pattern-seeking rhesus monkey. 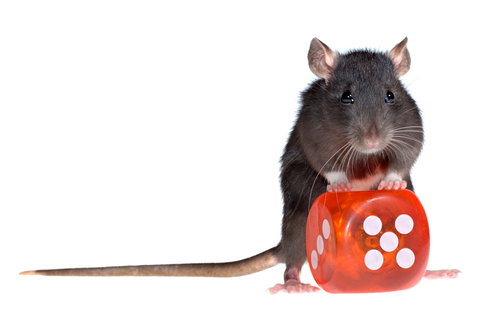 Researchers spared no expense in giving rats a true casino experience. They designed specialty rodent slot machines. The slots had levers, which could be utilized to collect payouts. They also had lights, which were used to signal wins, near-wins, and losses, plus a sound would play for each “coin,” or food pellet, that was won. The rats became so excited when the near-win lights illuminated, that they would routinely try to cash out when they saw them. If you find yourself dancing for joy for just a moment before your brain catches on that you’ve just missed three cherries on your slot game, you’re an excitable rat.

Different from most of the animal kingdom, lemurs are naturally conservative. A group of ringtails was given the equivalent of video slots. These, too, held all the bells and whistles of a casino game, including lights, sounds and imagery. Similar to the rhesus monkeys’ poker game, the lemurs could pick one of two choices on a touch screen, in order to have a shot at a jackpot of fruit-punch-flavored pellets. During the training phase, study participants were given the opportunity to learn which images were associated with which payouts. When the test began, both images were set with the same
return-to-player (RTP) value, though one image would pay out more than the other, just at a less frequent rate. For instance, one image would pay one pellet each game, while the other would pay out two pellets, every other game. The ringtails showed a preference for the consistent win 72-percent of the time. Then, the RTP of the inconsistent win was slowly increased, yet the lemurs still chose the dependable win, even though their jackpot would have been higher with the other selection. It wasn’t until the inconsistent win paid out 7.5-times more than the consistent option, that more ringtails
decided to take a gamble. So, if you refuse to wager the farm, even when it’s a sure bet, you’re a cautious ringtail lemur.

Overall, the animals listed here can’t truly be pinned down to a single gambling trait. Many of them, especially rodents and primates, share numerous gambling behaviors with people. There is also some overlap between characteristics of different species. For this reason, it’s possible to be part rat and part lemur, or part rhesus monkey and part ringtail. Whatever kind of gambling animal you are, be sure you’re playing because you enjoy the game, even if there are no juice or food pellets involved.
Reactions: queenmap, Ellis and Mike

Hmm I guess I´m a mixture from the rhesus monkey and the pigeon ...
Reactions: queenmap, Mike and Ellis

Seaman63 said:
Hmm I guess I´m a mixture from the rhesus monkey and the pigeon ...
Click to expand...

I am still unsure which animal matches my gambling personality best.
Reactions: Mike

Ellis said:
Lol my animal is not in the list. I am like a snake, sneaky steal winningsssssss.........

hmm, can they all be combined into one? guess I'm a bit of all depending on my mood.

Time for a new animal.......kotsykombine. lol
Reactions: Mike and Marina

Kotsy said:
hmm, can they all be combined into one? guess I'm a bit of all depending on my mood.

Time for a new animal.......kotsykombine. lol
Click to expand...