Find out if you have what it takes to become a superhero at Vera&John online casino by entering a fantastic new promotion running at the site.
It comes as no surprise that many online casinos are trying their best to launch Superhero themed slot games since so many of their rivals are doing so these days.

As such, Yggdrasil software group has rolled out its newest title – Super Heroes video slot.
Vera&John Casino has decided to celebrate two birds with one stone – the launch of Super Heroes slot as well as Halloween.

“Have you got what it takes to be a spinning hero this Halloween?” asks Vera&John Casino. 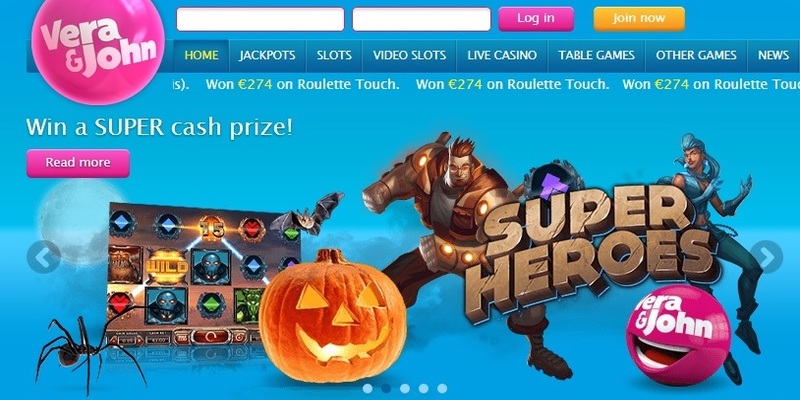 There is a super-sized €20,000 in cash up for grabs in this promotion, with a staggering 200 players in line to win part of the prize pool.
In addition, there is another €5,000 in cash that raffle winners will be able to take home.

So how do you go about getting your hands on some of this cash?

Your first step is to head to Vera&John Casino during the promotion period. To qualify for the promotion, you simply need to make a minimum wager per spin of €1. The player who scores
the highest win from a single cash spin will be able to take home a fantastic top prize of €5,000. Players who don’t manage to get top marks on the leaderboard shouldn’t despair however.
From November 4th until November 6th 2016, you could be among the top 500 players to be eligible to win a cash prize because of the scheduled Pick and Click raffle at the online casino.

If you are ranked between 1st to 500th place, you have to return to Super Heroes Slot beetween November 4th and 6th 2016 in order to participate in the Pick and Click raffle.