Zeus is perhaps one of the more popular games created by WMS and it is also one of the older games in the portfolio.

This game is based on Greek legends and presents players with a satisfying experience and the ability to collect some handsome payouts when playing for real money.
It is a standard video slot offering five reel layout. There are 30 paylines, so there are plenty of opportunities to create wining combinations on the reels.
This is one of the most famous games around the world and it can be enjoyed from the comfort of home with the online version.

Following the actions of the Greek God Zeus, players will have control over bet amounts when they play.
Offering a top payout of €2500, the game surely has many rewards that can be enjoyed.
Unfortunately, this is not a jackpot game, but the features and base game payouts will make up for this lack.

The base game features some incredible symbols including stacked Zeus and wilds. The hand of Zeus holding a bolt of lightning is the game scatter.Three of these will trigger
an awesome bonus that will be discussed below. In addition to these icons, the game features a helmet, Pegasus, boat, gold coins, silver coins, harp, vase and wreath.
Unlike many of the other Williams Interactive video slots this selection does not use any playing card icons. All of the symbols that are present represent the theme quite well. 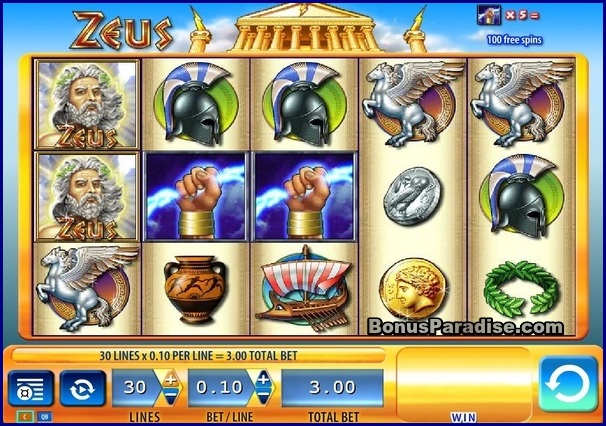 The wild in the game is depicted by a WILD symbol and this can appear anywhere on the reels. The wild will stand in for all regular game icons to help create wining combinations.
The only symbol that cannot be replaced by the wild is the scatter, which is the lightning bolt in the hand of Zeus. To enjoy instant payouts, players will have to get at least two scatters on the reels.

If players manage to get three or more scatters to appear, they will be granted access to the bonus round.

Should players get three more scatters during a free spin, the feature will be retriggered.
During this bonus, players will enjoy added stacked Zeus icons and wilds, which can really help to multiply wins.


Having the ability to win 100 free spins is a definite attraction and is one reason many players still enjoy this game title. It has been online since 2010 and remains one of the popular choices for many players. It is especially popular among those that enjoy the action of penny video slots, but it can also be a great choice for mid rollers since it does support higher bet amounts.

Unfortunately, some players may be disappointed to learn that there are no other bonus rounds offered in the game. A number of players will seek out video slots that have free spins as well as second screen bonuses, but this is not an option when playing Zeus. To collect payouts players will have to rely on the standard winning combinations and those that are created through the free spin bonus.

Though this game may at first appear as something very basic, players will see that the free spin bonus is worth betting on. Even though some of the base game payouts are lower than one would expect from WMS games, the free spin round will make up for this when it is triggered. However, some players may find that the bonus does not activate often enough.

Zeus is offered at most online casinos that are using software from WMS and it remains one of the most played games online.
The game has been so popular that he software company has developed sequel games, such as Zeus II, Zeus III and Kronos.

With Zeus, there may not be the chance to become an instant millionaire, but he rewards can be very impressive. Due to the low bet limits, the game is a perfect selection for anyone with a
casino budget and it often attracts those that are new to online casinos. Overall, the game is well designed and the graphics are amazing. Even though there are not many special features,
this game can prove to be entertaining and rewarding at times, which is why it remains at the top of the list for hundreds of online gamblers.

I really love the WMS slot Zeus I.
Getting the Free Games many times and during the free spins feature the slot can pay really good thanks to the stacked Wilds and stacked Zeus symbols!
Reactions: Kotsy, Marina and Ellis

Nice slot to play. The chance at 100 free spins along with the stacked wilds surely makes it promising.